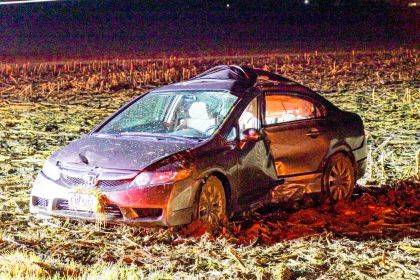 OSGOOD – A driver was transported for serious injuries early Saturday morning after the vehicle he was operating left the roadway and struck a utility pole.

At approximately 1:47 a.m., Darke County Deputies along with Osgood Fire and Rescue were dispatched to the 13400 block of Reed Road in reference to a single-vehicle crash with injuries.

According to the Darke County Sheriff’s Office, a preliminary investigation into the incident revealed a gray 2010 Honda Civic driven by Steve Gehret, 52, of Houston, was traveling south on Reed Road north of Foote Road. Gehret failed to maintain control of his vehicle traveling off the right side of the roadway and striking a utility pole before coming to rest in a field.

Gehret was treated on the scene for serious injuries prior to being transported to Wilson Memorial Hospital by Osgood Rescue. CareFlight was requested to the scene to aid in the care and transport of Gehret, but was unable to fly due to inclement weather conditions.