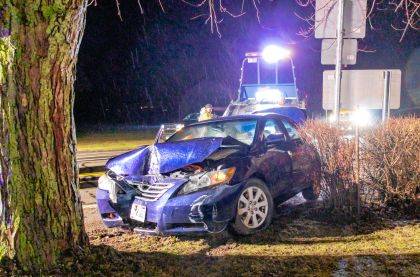 VERSAILLES – A Versailles teenager narrowly escaped injuries Friday evening after the vehicle he was operating left the roadway and struck a tree head-on.

At approximately 9:45 p.m., emergency personnel from the Versailles Fire Department responded along with Versailles Rescue and Deputies from the Darke County Sheriff’s Department to the area of State Route 185 and Mangen Road in reference to a single-vehicle crash with possible injuries.

According to the Darke County Sheriff’s Office, a preliminary investigation into the incident revealed that a blue Toyota Camry was traveling Southeast on State Route 185 when the driver failed to negotiate a curve, which resulted in the vehicle leaving the roadway. The Toyota came to rest after striking a tree head-on in the front lawn of a private residence located at 11268 State Route 185.

The male driver of the Toyota, who was wearing a seatbelt at the time of the crash, was treated on the scene by Versailles Rescue prior to refusing any further treatment and transport to a medical facility.