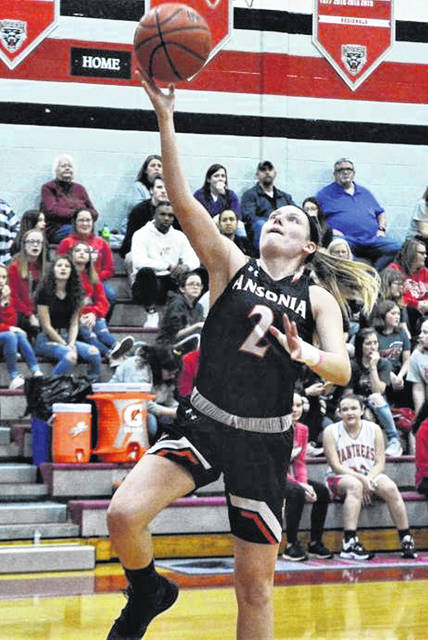 LEWISBURG – Despite host Tri-County North coming out of the gate strong in front of a verbose hometown crowd, the Ansonia Lady Tigers gathered themselves and soon got the upper hand. Strong outside shooting and a tough defense made the difference in this late season showdown between two CCC teams. Ansonia would win easily 58-34.

With North not having a JV team – the junior high teams competed in before the varsity game. North managed to win both of these games. So there was some measure of momentum when the varsity game started. The home stands were crowded at the start of the game and North initially raced out to an early lead. It was 11-2 about midway through the quarter. The visiting Lady Tigers fans had to feel a little nervous.

But Emma Barga hit a trey and that seemed to spark the offense. The Tigers now went to work – pinning North at 11 and ringing up 17 points of their own to change the momentum of the game. That took the crowd out the game. North remained in a zone defense most of the game and Ansonia took advantage of this by hitting 10 three point shots on the night. Ansonia was firmly in control at halftime 36-16.

“We took advantage of their defense by moving the ball around their perimeter and getting some open looks,” said Ansonia coach Bruce Davison. “We able to get the ball to a point where it became a catch and shoot. Emma Barga is a tremendous competitor she knows how to overcome. She came out and established herself early. When North went on that opening run, we needed to counter that. She hit the big three and with her shooting and rebounds we turned things around in that first quarter.”

Defensively, Ansonia made frequent changes that kept North flustered. Once they started to adapt to one defense, Ansonia would make a change and would have the upper hand again. They used both man to man and zone defenses – sometimes trapping out of the zone defenses.

They did go full court at times in the first half – North has a thin roster and so this seemed to quickly tire out the Lady Panthers. North stuck with their zone defense most of the game and then tried a man to man defense late in the third quarter but Ansonia scoring continued unabated.

In the last quarter a lot of the bench was able to see playing time and Ansonia was able to secure a conference win on the road. The team had three players score in double figures – Emma Barga, Mariah Troutwine and Molly Barga.

Coach Davison on the game, “I was really proud of our girls. I thought they came out and played hard. Tri-County North had a great crowd tonight – student section and the band. I thought it was great to see the excitement for girls basketball. They got off to a good start, came out and hit some shots but our girls maintained their composure and got back into it.”

He was asked about Mariah Troutwine, “Our point guard did well tonight. She did not get rattled when they got up. She controlled the offense and settled them down. If your point guard is rattled and shook up, then don’t expect the rest of your team to have their composure as well.”