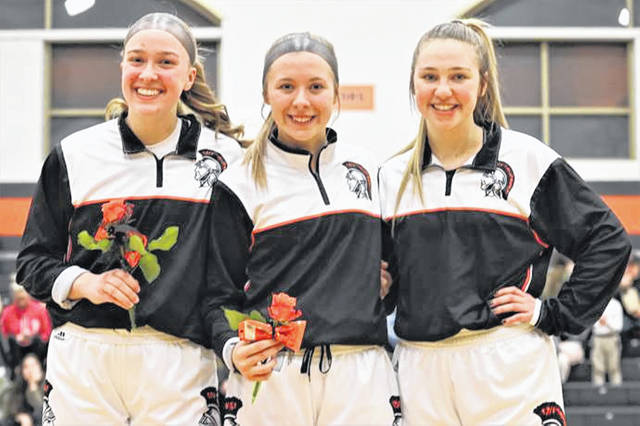 “They already have had 60 wins,” Arcanum coach Michael said of his three senior; Kayla O’Daniel, Gracie Garno and Elliana Sloan. “Tonight is 61 since their freshman year. Coach Grote did a wonderful job here before I came along.”

O’Daniel would go on to lead all scorers on the night with a game high 17-points and push her career scoring mark to 1,014 points – and counting.

With the 1,000th point in the book, the game was stopped with O’Daniel’s father presenting the Lady Trojans’ senior the game ball.

“I had Kayla’s dad give her the ball because I don’t think she would be where she is at if it wasn’t for him,” Dean stated. “All the hard work he did with all those girls – he did a good job getting them ready for high school.”

Gracie Garno entered the night needing eight assists to break the Lady Trojans single season assist mark. The Arcanum senior went on to set the new Lady Trojans record on the team’s last scoring play of the night and is now just 12 assista away from the school’s career mark.

“Gracie has had a really good career here at Arcanum and couldn’t be more-happy to have her break those records and own them,” said Coach Dean.

Newton took an early 2-0 lead at 5:14 in the first before the Lady Trojans would close out the opening period leading 16-4 with O’Daniel pacing Arcanum with 7-points, Taylor Gray adding 4, Garno and Hailey Unger with a basket each and Elliana Sloan with a free throw.

The Lady Indians defense kept the second and third quarters close with Arcanum taking the second quarter 11-9 and period No. 3 by a 13-10 score sending the game to the fourth with the Lady Trojans holding a 40-23 advantage.

“The girls were excited in the locker room afterwards,” Dean said. “It’s funny how unselfish they can be with each other. You would have thought they (O’Daniel and Garno) were sisters but they are tough competitors in practice. They did good tonight together.”

“The score doesn’t really show how well we played,” said Fiely. “A few too many turnovers. Arcanum sped us up a little bit and that’s when we turned it over, tried to dribble a little bit too much. When we played stronger and used our teammates, we got great looks.”

“Kate Walters had unofficially 20 rebounds tonight but we’ll see on the film,” Fiely said of his 5’11” sophomore. “Overall we did a good job. Brooke Deeter, our senior being back kind of slows us down and makes good passes for us, makes good reads and just is a calming effect on the others on the floor.”

“Huge difference,” Fiely said of his team’s play from the beginning of the season to the present. “They know who I am now, I know who they are. They are trusting in the process and are getting better every day in practice.”

The Lady Trojans will take a 10-1 conference mark on the road to face the Tri-Village Lady Patriots, owners of an undefeated CCC record on Thursday, February 6th at Tri-Village.

“We have an opportunity here with Tri-Village – force a three-way tie (Tri-Village, Arcanum and Franklin Monroe) in the conference and get some spark before we get into the tournament,” concluded Coach Dean.

All nine Lady Trojans made it in the scoring column, led by O’Daniel’s 17-points.