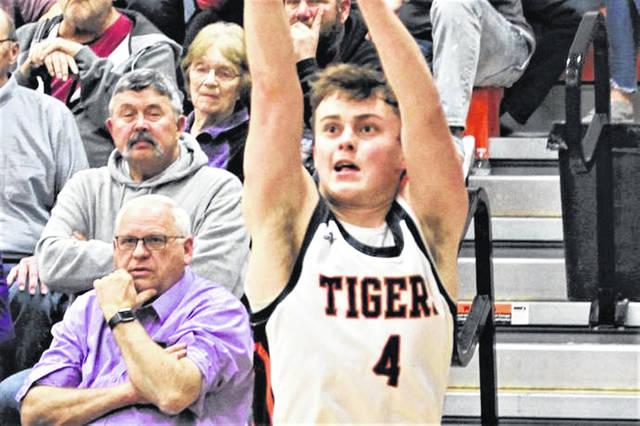 ANSONIA – Ansonia senior, Hunter Buckingham came into the night tied with Devyn Sink as the school’s all-time 3-point leader with 163 treys and took outright ownership of the 3-point mark hitting the first shot of the night against Miami East to stand at 164 career 3-pointers.

“It couldn’t have happened to a nicer kid,” said Ansonia coach Devin Limburg. “He has put a lot of time into coming back this season and I know this is one of the goals he wanted to achieve.”

Buckingham, the son of Shane and Darcy Buckingham set the Tigers single season 3-point record as a junior with 80 treys in the 2018-2019 season and looked to break the school’s all-time 3-point mark early in the year before a foot injury sidelined the sharpshooter to open the 2019-2020 basketball season.

“After hitting 80 3’s and breaking the single season 3-point record last year, I know this year has been a bigger battle with the foot injury,” Limburg stated,” but he has battled through and has started to really find his rhythm.”

Buckingham, the starting quarterback for the Tigers football team missed the opening three basketball games of the season due to a football injury and saw limited action on the basketball court for a large part of the current season. Now back to near normal playing condition over the past few weeks, the Ansonia senior made the most of his opportunities on the court.

The new all-time 3-point leader took advantage of Senior Night to help lead his team to a 51-34 Cross County Conference victory over the Miami East Vikings.

“To do it on senior night makes it just that much more special,” Limburg said. “I know he had a lot of family in to see him and to do it on the night we were celebrating the seniors, makes it that much more memorable. I’m very proud of Hunter and all of his hard work, and hopefully he can keep it rolling into tournament time.”

The Tigers scrappy defense held the visitors scoreless in the opening period while scoring 11-points to lead 11-0 after one quarter of play.

Buckingham buried two 3-pointers in the first quarter in setting the school’s record.

The Vikings battled back to take the second quarter 20-11 with Buckingham going scoreless. The Vikings trailed Ansonia 22-20 with the teams heading to the break.

Ansonia got back on track outscoring the visitors 15-7 in period No. 3 with Buckingham nailing two additional 3-pointers and taking a 37-27 lead to the final period of play.

The Tigers closed out the night doubling up on the Vikings 14-7 in the fourth with Buckingham making his fifth trey of the night to earn a 17-point win over Miami East.

Buckingham finished the night with 15-points all coming by way of five 3-pointers to give the senior 168 career treys.