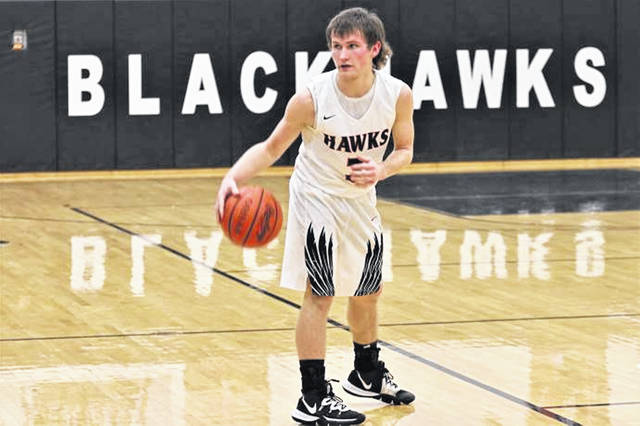 UNION CITY – The Mississinawa Valley Blackhawks entertained the Fort Recovery Indians from the MAC and came up short in a 53-32 Saturday night non-conference matchup.

“Cody Dirksen played hard,” said MV coach Tim Barga. “He had a good game tonight. Max (Dirmeyer) always goes hard. Those two guys went real hard tonight but we need more points out of the guys besides Blake (Scholl) and Max. If you are going to win games you have to have five guys on the court that can score and right now we are looking for that.”

“Those guys played hard tonight,” continued Barga. “We look for Blake to shoot it. We need him to get what he’s getting but we need the other guys to do some scoring also.”

“Coach Barga does a great job,” said Fort Recovery Coach Jim Melton. “He gets the most out of his guys. I have a ton of respect for him. His kids play hard for him and he does a really nice job.”

The visitors took a 14-11 lead after one period of play with Max Dirmeyer scoring 5-points for the Hawks, Cody Dirksen adding a 3-pointer, Josh Fett a 2-point goal and Blake Scholl knocking down a free throw.

Period No. 2 went to Fort Recovery 12-5 sending the teams to the break with the Indians owning a 26-16 advantage.

“We missed a lot of easy shots but they had a hand in our face and we were altering our shots,” Barga said. “I have to give their defense credit. They did their job on us.”

Fort Recovery used 15 third quarter points while holding the Blackhawks to 7-points to extend their lead to 41-23 with one quarter to play.

“We were sloppy early on and I challenged our guys at halftime about cleaning some things up and getting organized and valuing the basketball,” Coach Melton said. “They come out and obviously took care of it. I was proud of them for that.”

Fort Recovery would complete the sweep of four quarters taking the final period 12-9 for a 21-point win.

“Everybody has the green light,” Coach Barga said. “I’m not sitting back saying you can’t shoot, you can’t shoot. I’m not saying that. They have the green light so nobody can go home and tell their parents – well, coach won’t let me shoot. That’s not the case, but you have to pick your poison. You just can’t go out there and just throw stuff up.”

The Blackhawks have an opportunity to play for a share of the league conference when they faceoff with National Trail at home, Friday, February 7th. MV has one conference loss while the Blazers are undefeated in CCC play.

“If we win out, if we beat everybody,” Barga noted. “Trail has not been beat yet – it’s a longshot, yet we’re hoping. We have done well in the league and very poor in the non-league.”