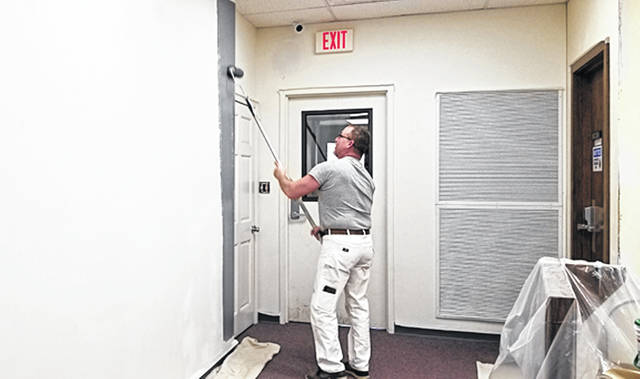 The box, typically located in the police department’s front lobby, has been moved while some portions of the building’s interior receives a much needed fresh coat of paint — the latter provided by Ron Nelson of CountrySide Painting.

It was in 1998 that the Greenville Police Department moved into the former Greenville Federal Bank location on West Main Street.

For a short time, the GPD shared the space with the city’s water department, with the interior reflecting portions of the former bank, most notably rose-colored wallpaper.

On Monday, with the wallpaper gone and furniture moved or covered, Nelson made the first application of slate gray.

The drug collection box, temporarily stored in the detectives’ offices, has been readily used for several years, explained Lt. Roberts, at the start, the collection of prescription drugs alone weighed in at 200 pounds after one year.

“We were emptying the box constantly,” said Lt. Roberts with a continued steady flow today by individuals utilizing the free, safe, and simple way to dispose of unused or expired medicines.

The service is also anonymous, with a recommendation to keep medications in their containers, no need for separation or labels.

The box will return to the lobby upon project completion, once again available 24 hours a day, seven days a week, for any medication.

The U.S. Drug Enforcement Administration (DEA) disposes of the drugs collected by the GPD twice a year and hosts the National Prescription Drug Take-Back Day with temporary drug collection sites available throughout communities across the country.

The next National Take-Back Day is slated for Saturday, April 25, 2020.

According to the DEA, 9.9 million Americans misused controlled prescription drugs in 2018. The majority obtained by family and friends from a home medicine cabinet.