GREENVILLE — In a small case, not far from the gift shop at the Garst Museum, is a temporary display for a prominent local individual many may not have heard of — Kathryn Magnolia Johnson.

As February marks Black History Month, the museum highlights a prominent black, local individual, each year, and this year is particularly unique considering how few know of Johnson, a woman well ahead of her time.

Where does one begin on a life that includes political activism, publication, and teaching? Perhaps an emphasis on her Darke County roots starting with her birth in 1878.

Karen Besecker, a research specialist at the Garst Museum, who has dug deep into Johnson’s extraordinary history, shared that Kathryn was born to Lucinda and Walter Johnson, transplants from Indiana and Kentucky respectively.

Johnson, along with her seven siblings, was born near the black settlement of Longtown. Her father died a year after she was born, and with women having little to no rights at the time, her mother was forced to sell the family homestead. The large family then moved to New Paris in Preble County, where Johnson attended high school, and her mother remarried.

In New Paris, Johnson stood out amongst her fellow peers both as a black student and superb academic. She graduated top of her class, but the honor was bestowed upon a white classmate. However, not about to be dissuaded and encouraged by her stepfather, Johnson went on to attend college at Wilberforce University. She earned both a bachelor’s degree and a teaching certificate and taught in schools in North Carolina, Arkansas, and Kansas.

For a time, she taught in Darke County schools, but given the treatment of black individuals and lack of opportunities, Johnson found a calling in civil rights work. She was one of the first volunteers, followed by one of the first hires with the NAACP (National Association for the Advancement of Colored People). She traveled across the country, alone, says Besecker, to speak about and enroll others in the NAACP as well as to sell subscriptions to the organization’s newspaper, The Crisis.

The fact Johnson traveled alone as a woman and a woman of color, emphasizes her courage and conviction to empowerment and equality.

Eventually, Johnson’s work brought her to the YMCA (Young Men’s Christian Association), where she and a co-worker, Addie Waites Hunton, were sent to France to report on the treatment of black U.S. Army soldiers during World War I. Their work culminated in a book upon their return to the states, Two Colored Women with the American Expeditionary Forces.

Now an author, Johnson continued her work in civil rights by selling books written by prominent black authors. She never married, but would occasionally return to Darke County to visit family and friends. Eventually, she settled in Chicago until her death in Nov. 1954.

It was about three years ago when Besecker stumbled upon Johnson’s history after noting her older brother’s prominent standing, Joseph Lowery Johnson.

Joseph graduated from Greenville High School then attended Ohio Northern University, followed by Howard University Medical School for a degree in medicine in 1902. His history is extensive, from serving as a trustee of Wilberforce University to his appointment as the Minister to Liberia by President Woodrow Wilson in 1918.

Kathryn Johnson’s life was captured in a book by her great-grandnephew, Dr. Armand A Gonzalzles Sr., in 2018. He utilized original accounts of her life via diaries, letters, and news pieces. The book includes a family tree that shows lineage to General Nathanael Greene, the namesake of Greenville.

Besecker hopes the book, Kathryn Magnolia Johnson: Fearless warrior and revolutionary in pursuit of education, academic achievement, and social justice for Blacks throughout the nation and the world, will be made available in the Garst Museum gift shop, dependent on its availability.

“I have great admiration for her accomplishments and her bravery, for a woman of her time, let alone a woman of color,” said Besecker when asked to summarize her thoughts on this rather unknown but prominent local individual. “To have accomplished so much in her lifetime, to me, it would have seemed impossible.” 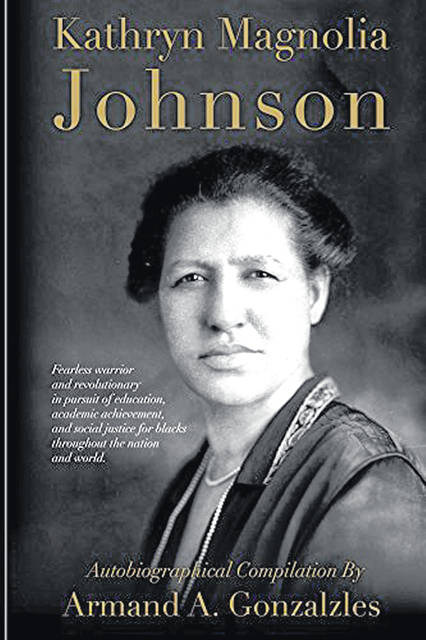