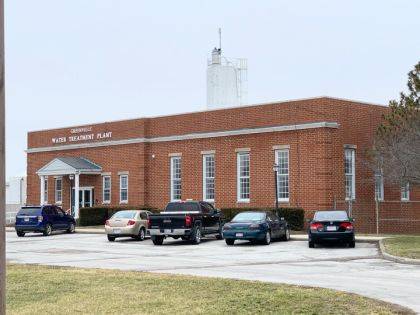 GREENVILLE – Water and sewer rates in the city of Greenville will most likely be going up sometime this year or next, but it will be up to Greenville City Council to determine how much the increase will be. Water Superintendent Gary Evans and Waste Water Superintendent Don Knife presented their needs and the estimated cost for those needs. The city’s most recent increase was in 2012.

The Water Department currently generates $2.1 million each year and nearly all of those funds are directed to the operating budget. They also have 15 years remaining on a settlement that brought in $147,000 last year and will increase to $250,000 a year by the end of the settlement. Evans shared he would like to see the income increase to $6 million a year.

In recent years, the cost to treat water has risen significantly due to the presence of Cryptosporidium in the Greenville Creek, which is the city’s main source of water. If not treated, Cryptosporidium can cause illness. The consistent levels of the bacteria are due to the agricultural area upstream of Greenville.

According to Evans, there is no money available for needed projects. The city has 85-miles of water mains and some of those mains were installed in 1893 when the first pumping and distribution station was built. An older main in the southern part of town must be flushed weekly to keep the water from turning brown. He would like to replace a mile of pipe each year.

If the entire $4 million increase is approved, the water plant would be able to continue with a $2.25 million operating budget, save $1.5 million a year for a new water plant, $1.25 million for distribution replacement (water mains) and $1 million for treatment, towers and equipment.

Greenville currently has one of the lowest water rates in the Miami Valley, but the proposed increase would put them near the top. Evans and Safety Service Director Curt Garrison offered two options to get to the $6 million revenue target. The first is to triple the rates and leave the minimum units billed the same. This would increase the monthly bill for a person using 0-10 units by $22.47 a month. The second option would double the current cost, but would raise the minimum billing units to 10. Residents using 0-10 units a month would see an $11.23 increase and persons using 6-10 units would see an increase of $14.17 to $25.93 per month. Forty-eight percent of residents fall in the 0-10 units category and 40 percent fall in the 11 to 20 units category ($27.89 to $45.53 more per month). The average units billed is 12. It was discussed that rates would be raised five percent each year after the initial increase in order to keep up with the rate of inflation.

Knife shared the cost of updates he needs at the Waste Water Plant over the next decade totals $22.7 million. Those projects include ultraviolet disinfection to move away from the cost of chlorine gas, sulfur dioxide, which costs $8,000-$9,000 a year (project cost is $1.6 million); new solids handling facility to replace the facility built in the 1960s and have exceeded their life span (approximately $5 million); ditch aerator replacement and rehabilitation with some ditches put into service in the 1950s and aerators replaced in mid to late 1990s (approximately $1.5 million); new headworks with grit removal is estimated at $8-$12 million; equalization basin is expected to cost $2 million; and a new administration building to replace the current building built in the 1930s (no estimate given).

Knife requested a 50 percent increase in the current rates and a five percent increase each year. If approved, the rates would increase from $30.40 for 0-10 billing units to $45.60. The current per unit price is $3.04 with the proposed price at $4.56.

Several council members expressed their uneasiness with the dramatic change in pricing and questioned how residents on a fixed income would be able to afford the new rates. Council will study the information given and will meet again in a special meeting on Thursday, Feb. 20 to continue their discussion. The meeting will be held in the basement classroom at 7 p.m.