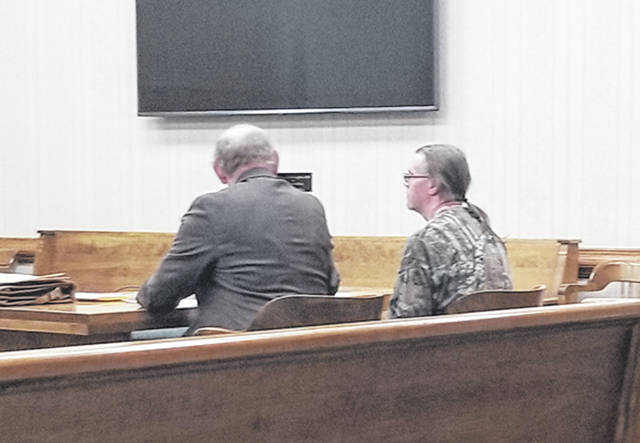 GREENVILLE — A Facebook Marketplace transaction brought a local man to Darke County Common Pleas Court for a change of plea on Thursday.

Nathan A. Sprowl, 42, went before Judge Jonathan P. Hein on a charge of receiving stolen property, a fifth-degree felony. He faces a maximum 12 months incarceration and a $2,500 fine, neither mandatory, for the Oct. 22, 2019 incident. One the defendant claimed he did not know the property he was trading and advertising on social media was stolen.

“If you plead guilty that would be inconsistent, understand?” said Judge Hein during a review of the defendant’s rights in the change of plea case. “Do you want more time to talk to Mr. Breaden about what to do?”

Sprowl, currently on probation for an unspecified drug offense in Dayton, stated he did not, and would later say “yes” when questioned again on whether he was satisfied with his attorney’s work.

Defense Attorney Randall Breaden clarified for the record his visits with the defendant at the Mercer County Jail where Sprowl was incarcerated. He noted review on the discovery, explaining elements of the charge, with his client, as well as noting Sprowl’s wish to work out a lesser charge. However, the victim was reluctant to a lesser charge of attempted receiving stolen property, which would have been a first-degree misdemeanor.

“Then Mr. Sprowl decided to go ahead and plead to the original charge,” continued Breaden.

According to Assistant Prosecutor James Bennett, there is no restitution in the case as the victim had recovered “most” of the stolen property.

“The items that were not recovered […] I don’t have any evidence that the defendant possessed those items,” said Bennett with an agreed recommendation between parties of community control sanctions.

Breaden also agreed on the recommendation, going on to cite from Sprowl’s point of view, he did not know the items were stolen. However, given the items his client received in trade, “he should have suspected something was not quite correct.”

Sprowl was released on an own recognizance bond with sentencing slated for Apr. 3.

*Austin W. Schwartz, 23, of Piqua, for one count of aggravated possession of drugs, a fifth-degree felony. He was released on an OR bond with his next scheduled court appearance slated for Apr. 3.

*Adam D. Sturgill, 33, of Gettysburg, for an arraignment on domestic violence, a fourth-degree felony. Currently incarcerated until the end of the month in the Mercer County Jail, a pre-trial conference slated for Mar. 9.