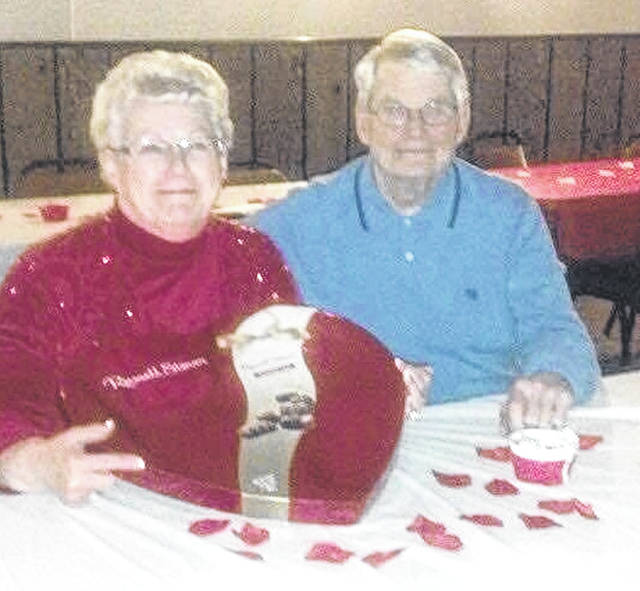 Social media readers were asked to respond to their most memorable Valentine’s Day. Here are their responses:

Nancy Kelly Eardley of Troy, who visits Darke County often for various events, remarked, “I have a memory. It was February 2014, my late husband and I went to a Valentine’s Day Dance at the Sanford American Legion in Sanford, Mich. They had a drawing and I won a huge heart-shaped box of candy. That was the last dance my husband and I went to. He got sick a month later with a UTI infection that affected his kidneys, and he passed away three months later.”

Local insurance agent Matt Jordan commented, “The first Valentine’s Day I spent with Andrea after we were married, it dawned on us that Feb. 14 is also our half-year anniversary since we got married on Aug. 14. So for 20 years, we haven’t missed celebrating our half anniversary in all our years of marriage!”

“I have a story for you, Linda,” said Lynn Bruner Hinshaw. “I think you did the original story 14 years ago. Susan Lynn Gunckle, our daughter, had her second open heart surgery on Feb. 14, 2006. Valentine’s Day has been very special to all of us since. Susan told her thoracic surgeon that he would find Jesus in her heart! We had at least 20 people in the surgery waiting room. We all stood in a huge circle and went around and each prayed for her. After — she looked at each one of us and told us all bye and she’d see us later! Harvey (her stepfather) and I with her brother, David, and her sister, Holly, all went back with her. While waiting, I had my Bible open and continually read scripture. When they took her, we all followed to the big metal doors with my Bible open to Isaiah 40:29-31. This was her scripture when she was 2 with her first open heart. We had a prayer vigil completely full with people praying from several hours before to at least a day.”

Hinshaw went on, “We gave the doctor a card with Jesus guiding his hand there in the surgery room. And we showed him the Prayer Vigil. He was speechless. Also, after we heard that the surgery was over and everything went well, Holly gave me a letter that Susan had written to me. Susan was prepared to meet Jesus if that was His will. Susan has been very well with her heart condition since then. Giving God all the glory and honor and praise and thanking Him for our daughter Susan. She’s a beautiful young lady to everyone but especially to me.”

Eric Fee recalled, “On our first Valentine Day together as a dating couple, we’d been dating like four months and had not said ‘I love you’ to each other yet. I went to Helen’s and bought a teddy bear with a balloon attached. They delivered it to her at Mote and Associates where she worked. As they were walking up the sidewalk, Kristin and a lady she worked with saw it and Kristin said, ‘That must be for you.’ She said, ‘No, my husband and I decided not to get each other anything.’ Kristin said, ‘It’s not for me, the balloon says ‘I love you.’ We haven’t said that to each other.’ Kristin and I went to dinner that night and she said ‘thank you for the teddy bear and balloon; by the way, I love you too.’ My face got white as a ghost because the balloon wasn’t inflated at the flower shop and I didn’t know it said that. The rest of the dinner was really quiet.”

He continued, “But that was the best mistake I ever made. Here we are almost 22 years later and I couldn’t love her anymore, at least until tomorrow. I fall in love with her more every day. I’m glad she stuck with me after the balloon. Also, about eight years into marriage on a Sunday that was Valentine’s Day, I put the kids in the car and jumped in the driver’s seat. I backed out and ripped the back door off the car on the side of the garage because I forgot to close the back kids’ door. That wasn’t as fun a Valentine’s Day.”

When asked if she had a memorable Valentine’s Day, Betty Monnin of Russia, Ohio, remarked, “No I wish I did; would love to help you. My Sweety isn’t very romantic, but we will celebrate Valentine’s Day in Daytona at the race track, seeing five races.”

Monnin, who attends the Monday afternoon Memory Lane dances at the VFW in Greenville, with her husband, Lindy, went on, “Lindy was a dance, but the only time my husband gets up to dance is when everyone around us tells Lindy that the dance is half over. That is a true story. In May this year we will have 54 years of togetherness. It doesn’t get any better. Half a dance out of him is better then NOTHING. All is good.”