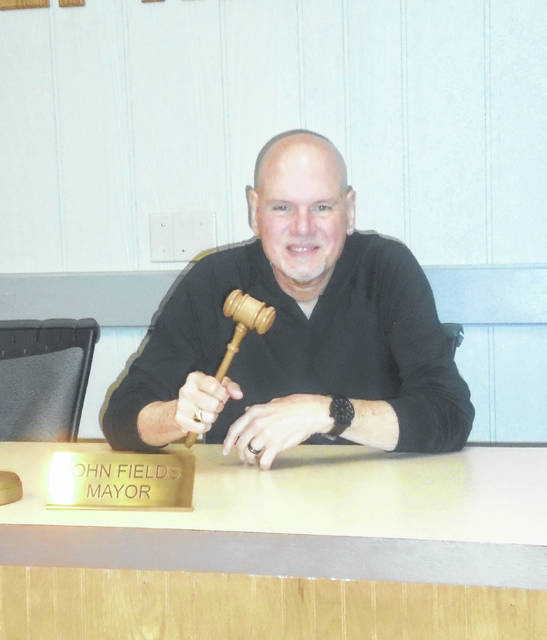 UNION CITY, Ohio — John Fields has been busy getting acclimated to his new role in the community — mayor of Union City, Ohio.

He served on council for two terms and at the end of his second term decided he would run for mayor.

He said he has been putting committees back together.

“We have had a few little bumps in the road,” he said. “Not any one day represents what the normal of everyday is to be.”

His main focus is to get the village’s voters to pass the operating levy, which failed at the polls in November.

“This levy was initiated in 1978, and is attached to property tax within the village at 1977 property values,” he said. “As a mayor, I can’t stress enough the importance of passage of these levies as we all work as one, to keep our village services operative and safe as well as striving to move forward under ever-increasing costs and mandates.”

He explained that this is a renewal and represents no increase in property taxes over what has been paid over the last 42 years.

“However, in the event of a failure, a 1-mil levy could appear on the ballot in November at 2020 property values as well as a loss of the 10 percent owner occupancy credit that we currently enjoy.”

He said they are planning to take their pleas door-to-door.

Taking Fields’ seat on council is Nicole Whitesel, while Dave Champ is replacing Councilman Brad Horsley, who opted not to run for re-election.

“We need to fill an open seat that was vacated by Dave Yount,” said the new mayor. “Travis Coning is president, Duane Pouder is mayor pro-tem and Eric Rust is another council member in addition to Nicole and Dave Champ.”

Fields is happy to report that paving crews are working on North Street in a $1.3 million project.

“I’d like to look into all of our streets,” he said. “We need to begin with crack sealing and chip sealing. We want to think about putting time into our streets and get our sewer and water safe and running, but we can’t do it because of money. That 1 percent only makes us 40 grand, but that’s a lot of money to us.”

He went on, “We want to make sure when you call for fire, ambulance, street crew or police, they show up. It will be a hard time if we don’t get that 1 percent back in our budget.”

As mayor, Fields said he oversees the police department and Karen Stubbs, the fiscal officer and village administrator.

“This is all new for me,” said Fields, who noted that it was former mayor Scott Stahl who got him interested in going on council. “For over 40 years, I was a welder until 30 years at the Union City Body Co. before I became disabled. I’ve built a lot of trucks — not anymore.”

The 63-year-old mayor was born and raised in Wise County, Va. in a town of 5,000 population about the size of Union City and the home of George C. Scott.

“Dad took a job at Sheller-Globe in 1969 when I was in seventh grade,” he said. “My roots are here. I graduated from Mississinawa Valley in 1975.”

He said after he graduated, he tried to be a hippie.

“I played hard rock bands for 40 years and was in the band Razor for 25 years with Al Gallatin, Paul Curtner and the late Roger Tingley,” he said. “We opened up for Rick Derringer and Brownsville Station.

He said he recently received a phone call from Union City’s own Chris Hawkey, a musician who now lives in Minnesota.

“He wants to share the stage with me for a night in Union City, Ohio,” Fields said. “He told me I was the guy who inspired him to play in the band”

Fields was married to the former Sarah Conyers on Dec. 24, 2017. His first wife of 33 years, Jenny (Cantwell) Fields died in August 2015 of cancer. They have a daughter, Sarah, who lives in Celina and works in human resource at Cooper’s. She will be 28 in March.

His hobbies are bicycling, fishing, dirt track racing, and anything to do with cars (still goes to Eldora Speedway every time it opens), music and sitting with “the guys and jamming.”

He also plays acoustic guitar at the Greenville Health and Rehab Center (formerly Heartland of Greenville) when asked.

He even admits to bringing his guitar into the mayor’s office to play a little bit.

“It gets me back where I can think again,” he said. “It’s a problem-solver.”

Living in a two-state community is do-able, according to Fields.

“We’re one town and too small to be divided like we are,” he said. “Chad Spence, the new mayor of Union City, Ind., and I have agreed we should work together. We’re too small not to. I want us to come together.”

He is the son of Carol Fields Tirey and the late John Fields, who died in 1979, and is an older brother to Bill Fields, who works at Ohio Valley Gas and was a former city judge on the Indiana side.

“Village council meets the first Monday of every month at 6 p.m., Fields said. “This month, we will be also be meeting on Feb. 15 to seat one new member and pass ordinances and resolutions that we didn’t have a quorum for.”