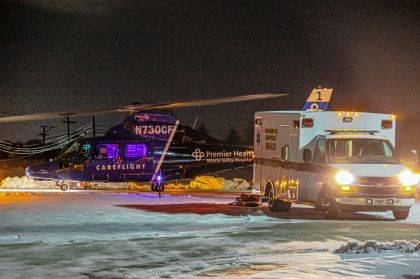 GREENVILLE – An industrial accident Friday morning at PFI USA Engineered Solutions left one man injured and flown by CareFlight for his injuries.

At approximately 5:35 a.m., emergency personnel from Greenville Township Fire and Rescue were called to 5963 Jaysville-St. Johns Road in reference to an employee with a cut to the wrist. According to initial reports, upon arrival on the scene paramedics discovered a 35-year-old male had received an injury to his hand while operating a piece of machinery at the facility.

Treatment was rendered to the employee on the scene by Greenville Township Rescue prior to being transported to the Darke County Justice Center’s landing zone. The injured employee was then flown by CareFlight to Miami Valley Hospital where his condition remains unknown at this time.