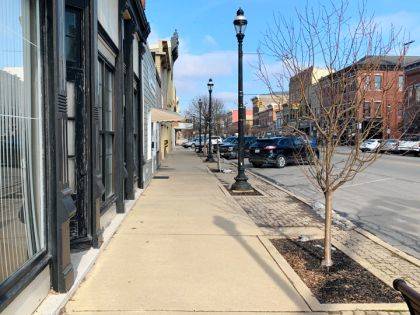 GREENVILLE – Greenville residents can expect nearly $3.5 million in improvements and equipment in 2020 when Greenville City Council approves the Capital Improvement Plan (CIP) funding. Maintenance paving and the Martin Street Project will account for almost $3 million of the improvements. Safety Service Director Curt Garrison shared the totals and projects with council on Tuesday.

The maintenance paving projects total $768,058.05 and include milling with overlay of 12 streets in the city. Streets include E. Third from Walnut to Tecumseh; Harrison Ave. from Walker to Birt; Wayne Ave. from W. Fifth to Birt; N. Chippewa from Russ to Buckeye; Devor from Wayne to W. Fifth; Sixth from Walnut to Montgomery; Walnut from E. Main to Martin; Sunset Drive from Chippewa to Radcliffe Drive; Welsley Court from Sunset to the Cul-de-sac; Fairfax Court from Radcliffe to the Cul-de-sac; West Hamton; and Radcliffe Drive from Russ to the dead end. The city has also set aside $50,000 for miscellaneous patching.

Garrison shared the city is split evenly with a third of the projects taking place in the southern, middle and northern parts of the city.

A project not included in the CIP, but slated for 2020 through the Ohio Department of Transportation is Martin Street. According to Garrison, the reconstruction of the street is expected to cost $2.1 million. In conjunction with this project, the city will replace the loop system for the street lights at Martin and South Broadway and U.S. Route 36 and State Route 571 with the Ladar. Ladar is a box that sits near the street light and determines when a car approaches the light. The cost per intersection is $35,000.

Downtown Greenville will see a huge boost from this year’s CIP funds with downtown street lights on Third, Fourth and Fifth Streets from Walnut to Sycamore. These would be the acorn-style lights that would match South Broadway and the lights along Fourth Street in front of St. Clair Memorial Hall. The cost of the project is estimated at $47,000.

With the replacement of the pavers with stamped concrete on South Broadway in 2020, the city also plans to install conduit and uplighting in the downtown area. The estimated cost for this project if $47,000. The street department will be doing much of the work.

The police department received initial approval to replace a cruiser at cost of $42,755 and Tasers at a cost of $55,310. According to Garrison, the Tasers are past their lifespan and parts are difficult to find. The cost would be split over five years at zero percent interest. This year’s cost is $11,222.

The street department has asked to replace four mowers at a cost of $50,000. The department will also coat roadways paved in 2019 with Reclamate to lengthen the life of the pavement. The cost is $49,000.

North Broadway should soon see new street lights all the way to Russ Road. The cost of the project is $27,600.

Council is expected to approve the CIP projects at its next regular meeting on March 3.

A work session will be held on Thursday at 7 p.m. in the basement classroom to discuss water and sewer rates, as well as the sidewalk project.