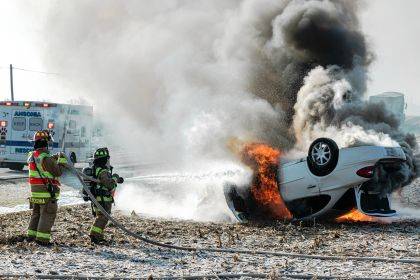 ANSONIA – Two people were injured Wednesday morning after being involved in a rollover crash and subsequent car fire on the outskirts of Woodington.

At approximately 9:10 a.m., emergency personnel from the Ansonia Fire Department and Ansonia Rescue responded along with deputies from the Darke County Sheriff’s Department to the 9400 block of State Route 49 North in reference to a single-vehicle rollover crash with possible injuries.

According to the Darke County Sheriff’s Department, a preliminary investigation into the incident revealed a white Buick LaCrosse was traveling southbound on State Route 49 when the driver lost control of the vehicle for unknown reasons and crossed left of center. The driver overcorrected, crossing back and off the right side of the roadway resulting in the vehicle rolling at least once coming to rest on top and catching fire. According to an eyewitness account, the driver and occupant were able to kick open a door and climb from the vehicle as it began to burn.

Both the male driver of the Buick and his female passenger were treated on the scene by Ansonia Rescue prior to being transported to Wayne HealthCare for what were described as non-life threatening injuries.