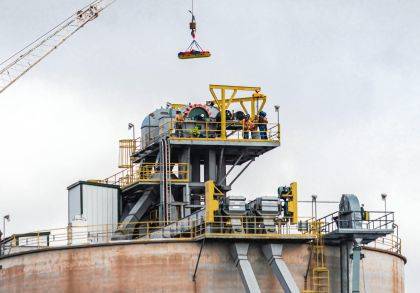 GREENVILLE – Firefighters and Paramedics worked closely together in a coordinated effort Thursday afternoon during the use of a crane to remove a patient from a nearly 150 foot high platform atop a grain bin at the Andersons Ethanol Plant in Greenville.

At approximately 11:01 a.m., emergency personnel from the Greenville City Fire Department responded along with Greenville Township Fire and Rescue to the Andersons Ethanol Plant, located at 5728 Sebring Warner Road, in reference to a contractor approximately 150 feet in the air and possibly not breathing.

According to Chief Steve Wenning, of Greenville Township Fire and Rescue, it was discovered that a male contractor had suffered a medical emergency while on a platform atop the grain storage bins. In coordination with the Greenville City Fire Department, paramedics from Greenville Township Rescue were able to access and begin treatment of the patient from the platform. The patient was then able to be removed through the utilization of a crane already in use on site at the plant.

The patient, who has yet to be identified, was treated on the scene by Greenville Township Rescue and transported to Wayne HealthCare where his condition remains unknown at this time.

Chief Wenning noted that the rescue efforts were possible due to the coordinated efforts of both departments. Greenville City Firefighters coordinated and directed the rescue from the ground while in constant communication with Greenville Township Fire and Rescue personnel in the air.

No further injuries or incidents were reported during the course of the rescue.