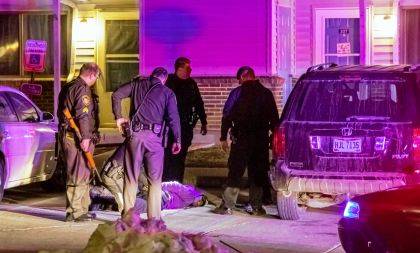 GREENVILLE – A pursuit, which began as a routine traffic stop, ended Wednesday evening with a suspect in custody after leading Darke County Sheriff Deputies and Greenville Police Officers through Greenville.

According to the Darke County Sheriff’s Office, at approximately 7:25 p.m., a Darke County Deputy conducted a traffic stop for a speeding violation in the area of Russ Road and KitchenAid Way.

The suspect, identified as Eric J. Martin, 26, of Hollansburg, then fled the scene for unknown reasons while the deputy was attempting to serve the citation. The pursuit was joined into by the Greenville Police Department and additional Darke County Deputies as the driver led law enforcement through residential neighborhoods and down Wagner Avenue at slower speeds. The pursuit came to an end on Oxford Drive, in Greenville, with the suspect pulling into a parking lot of Surrey Lane Apartments.

The suspect, Martin, refused to exit his vehicle and follow orders given to him by officers and deputies. Martin was taken into custody after a brief standoff with officers. He was evaluated on the scene by Greenville Township Rescue prior to being transported, for precautionary reasons, to Wayne HealthCare for further evaluation. Martin was released to the Darke County Sheriff’s Department where he remains in custody under charges that include: Failure to Comply with a Police Officer and Fleeing and Eluding.