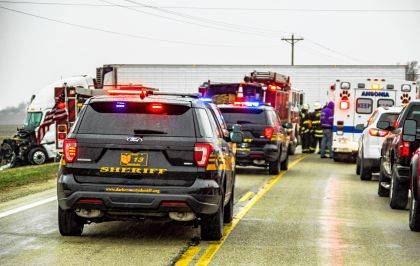 ANSONIA – The Darke County Sheriff’s Department is investigating a fatal crash involving a semi-tractor and trailer that occurred Wednesday afternoon at the intersection of Washington Road and State Route 49.

At approximately 12:42 p.m., emergency personnel from Ansonia Fire and Rescue responded along with the Rossburg Fire Department, the Ohio State Highway Patrol and deputies from the Darke County Sheriff’s Department to the intersection of State Route 49 North and Washington Road in reference to a serious injury crash. According to the Darke County Sheriff’s Office, a preliminary investigation into the incident revealed a white Freightliner tractor and trailer driven by Andrei Mihaescu 28 of Van Buren Township, Mich. was traveling westbound on Washington Road when Mihaescu failed to yield to oncoming traffic and pulled into the path of a gray Dodge Journey driven by Karla K. Greer, 55 of Rossburg, who was traveling southbound on State Route 49. The two vehicles collided before coming to rest in the front lawn of a private residence located at the southwest corner of the intersection.

The Greer was treated by Ansonia Rescue prior to being pronounced dead on the scene after succumbing to her injuries. Mihaescu was evaluated on the scene and refused further treatment and transport to a medical facility.

The Darke County Coroner’s Office, as well as the Darke County Sheriff’s Department’s Accident Reconstruction Team, were requested to the scene to aid in the investigation of the crash. State Route 49 remained closed at Washington Road for several hours while deputies conducted their investigation and the wreckage was removed.

Mihaescu was taken into custody and charged with Vehicular Manslaughter and Failure to stop at a clearly posted stop sign. Mihaescu was transported to the Darke County Sheriff’s Office and released to the jail.