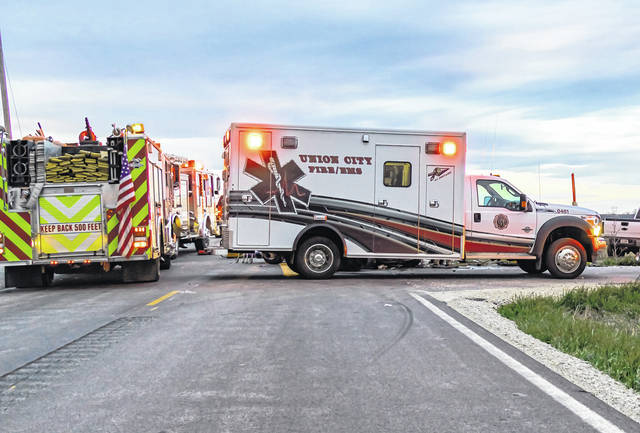 Union City, Ind. — A Union City man was pronounced dead on the scene after being involved in a two-vehicle crash outside of the Village of Union City on Monday.

According to the Randolph County Sheriff’s Department, a preliminary investigation into the incident has indicated that Dalton S. Hensley, 22, of Winchester, Ind., driving a 2011 Chevy Silverado, was westbound on Greenville Pike and failed to yield the right of way to a southbound vehicle driven by Norbert F. Frantz, 75, of Union City, Ind.

The 2001 Toyota SIE mini-van, driven by Frantz was southbound on State Road 227 approaching Greenville Pike when the Silverado came across his lane of travel. The front of Frantz’s vehicle struck the passenger side of Hensley’s vehicle causing the latter to go off the southwest corner of the intersection where it came to rest in a field.

Frantz’s vehicle came to rest in the intersection facing northwest.

Hensley was treated at the scene by Union City EMS. Frantz was pronounced deceased, at the scene, by the Randolph County Coroner.

This crash remains under investigation by the Indiana State Police.