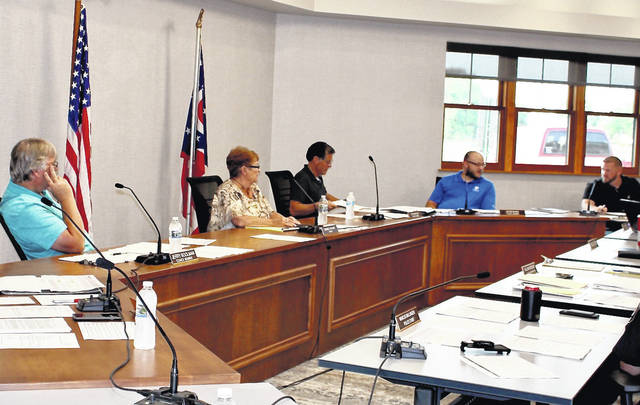 ARCANUM — Visitors to Arcanum’s Ivester Park may soon enjoy a little more walking room, due to a a state grant.

Arcanum Village Council met Tuesday evening for its first official gathering in the village’s new city building. Previous meetings had been held via video conference with only a few members physically present due to COVID-19.

The village has announced plans in the near future to extend Ivester Park across Painter Creek and behind the community swimming pool. A portion of the money for this project comes courtesy of a Clean Ohio grant from the state.

“Our goal is to give community members a little bit more space in the park by extending a walking path that leads behind the pool,” Village Administrator Bill Kessler said.

Kessler also discussed the town’s plans to replace the concrete on all crosswalks in the town. He further explained the village’s “lagoon retirement” project. This project relates to Arcanum’s new mechanical water facility that, unlike the previous water facility, does not require the lagoons located directly behind the new city building. One of the two lagoons will be drained and filled in.

Village Fire Chief Kurt Troutwine discussed the number of runs the fire department made in the first half of 2020. He also provided statistics concerning the estimated time it takes the fire department to respond to alerts, saying he was very pleased. The village recently received a $10,000 grant from the state and a majority of the funds will be used to purchase new gear. He also announced an upcoming event in which six new firefighters will be sworn in August 2, at 2 p.m.

Similar to the fire department, Police Chief Marcus Ballinger told council he hopes that the town will receive grant money for new uniforms sometime before September. He also briefly discussed his ideas for establishing a foot patrol.

“Foot patrol is about getting officers out of their cars and giving them time to interact with the community and get to know the people they serve,” Ballinger said when asked about the details.

He added, “Arcanum is a great town for foot patrol, there are very few places that can’t be reached by walking, so I’m excited to see our officers out in the community.”

In light of COVID-19, Ballinger said he is still working out the details of foot patrol and how to keep community members and police officers safe during this time.

The village council also passed a resolution adopting the town budget for 2021.

Arcanum Village Council meets the second and fourth Tuesdays of each month at 7 p.m. For further information, go online to www.villageofarcanum.com