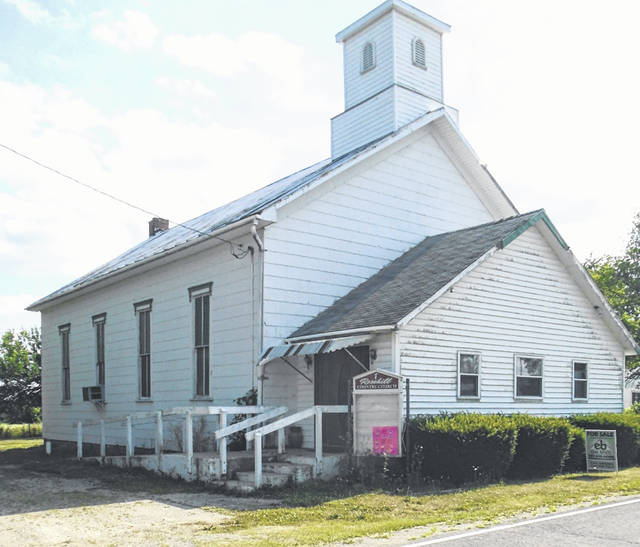 ROSE HILL — Because of a drop in attendance, Rose Hill Church has been put on the market.

“We felt we have to sell the church due to low attendance,” according to a message sent from church members. “Our pastor wasn’t feeling well and had a lot of other things to do so he felt he had to resign. We didn’t feel we had any other choice.”

Pastor Donald Brode served the church from 2008 until his passing in March 2018.

He was born in Frostburg, Md., and moved to West Milton to be near an old Army buddy (Paul Burke) of Greenville.

He became a pastor in 1985 and served as associate pastor of both Voice for Christ at Clayton and at Christ’s Cathedral in Dayton.

He happened to come to Rose Hill because of his friend, and, later, wife Judy Liggett Whistler, who in later years identified the church as the “Little White Church on the Hill” and would exchange those words for the ones in the original hymn, “The Little Brown Church in the Vale” when sung by parishioners.

After his passing, there were a few guest ministers. Then, church members were happy to welcome Pastor Dan Ferguson and family who were there until the closing.

The original church was built on the same lot in 1860. The property was bought from William Wolf and wife for the sum of $10.

Historical accounts indicate the original church was torn down and the present one built in 1899. Horseback circuit riders were the early ministers until 1898 when Rev. F.M. Kissel was the first permanent minister.

It officially became independent and was named Rose Hill Country Church in 2010.

In the earlier years it was a very active church.

“We held ice cream socials with hand-cranked ice cream, homemade pies, cake and sandwiches,” church members said. “We also held soup suppers and did very well. At one time they had 64 members, six Sunday school classes and a large Ladies Aid Society of 20 to 25 ladies. We also held Vacation Bible School. In the later years, we enjoyed having Gospel Sings with local talent and some known artists. We always served them a good homemade supper afterwards. We will miss that.”

They went on, “It is with deep regret and sadness we have to announce the closing. It was our home church where we grew up, had weddings, funerals, baptisms and lots of wonderful memories.We will miss it and never forget it.”

It was noted that the church is for sale but there may be an offer on it.

It will be the scene of a garage sale this Friday and Saturday.