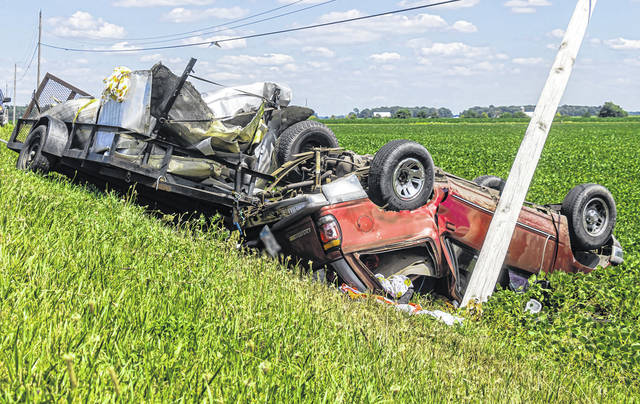 OSGOOD — Two people were reported injured Tuesday as a result of a single-vehicle rollover crash in northern Darke County.

At approximately 2:15 p.m., emergency personnel from Osgood Fire and Rescue responded along with deputies from the Darke County and Mercer County Sheriff’s Offices to Darke Mercer County Line Road, west of Reed Road, in reference to a single-vehicle rollover accident with injuries.

According to the Darke County Sheriff’s Office, a preliminary investigation into the incident revealed that a red Ford Explorer was traveling west on Darke Mercer County Line Road. It is believed that a loaded utility trailer being pulled by the Ford experienced a mechanical failure forcing the Explorer left of center and off the roadway. The vehicle then struck a utility pole causing the vehicle to roll at least once coming to rest on its side down a steep embankment.

The male driver, as well as a female passenger, were treated on the scene by Osgood Rescue prior to being transported to Mercer County Community Hospital in Coldwater for what were described as non-life-threatening injuries.