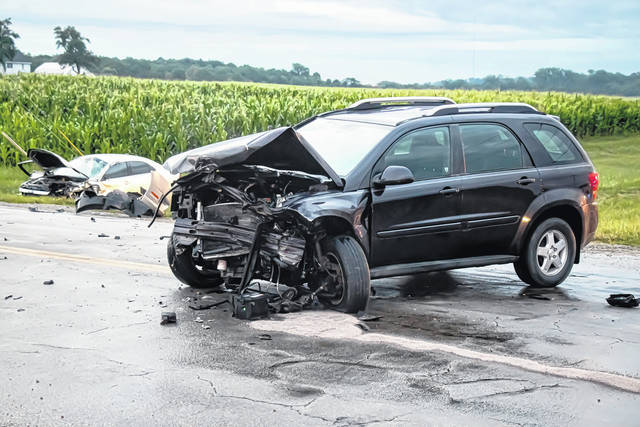 GREENVILLE — A two-vehicle crash Tuesday morning has left a driver hospitalized after the near head-on collision sent his vehicle off the roadway.

At approximately 5:52 a.m., emergency personnel from Greenville Township Fire and Rescue responded along with deputies from the Darke County Sheriff’s Office and officers from the Greenville Police Department to the intersection of State Route 118 and Children’s Home Bradford Road in reference to a two-vehicle injury accident with possible entrapments.

According to the Darke County Sheriff’s Office, a preliminary investigation into the incident showed that a black Pontiac Torrent was traveling south on St. Rt. 118 when the driver of the vehicle failed to notice and pulled into the pathway of a silver Ford Fusion traveling north. The Pontiac attempted a turn eastbound onto Childrens Home Bradford Road when the two vehicles collided, sending the Ford off the right side of the roadway down an embankment alongside a field.

The male driver of the Ford was mechanically extricated from his vehicle by Fire fighters prior to being treated on the scene by Greenville Township Rescue for what were described as non-life-threatening injuries. The driver was then transported to Wayne HealthCare for further treatment and evaluation.

The female driver of the Pontiac was examined on the scene by EMS refusing any further treatment and transport to a medical facility.