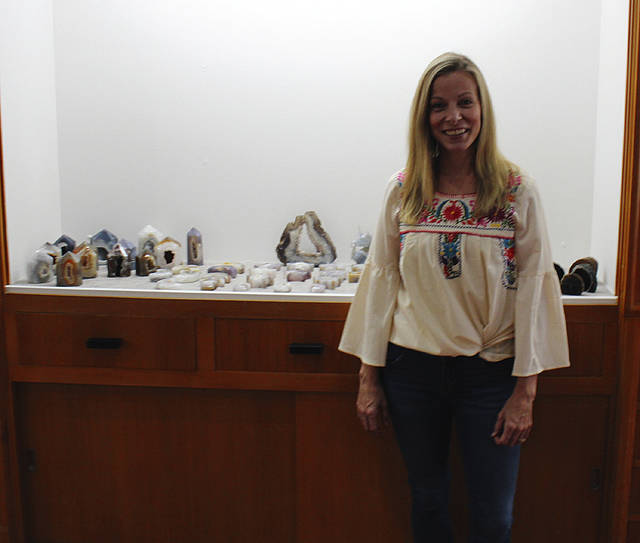 GREENVILLE — If you’re looking to explore the health benefits of crystals, or looking looking for a beautiful rock, then The Gracious Mineral Co. in downtown Greenville is the place to see.

Shop owner Destiny Phlipot moved into the location at 410 S. Broadway several months ago and her storefront business is now up and running.

“I moved in here in March,” Phlipot said. “It took from March to June to take it from a coffee shop to a rock shop.”

Phlipot has had a love of rocks since she was a young girl growing up in rural Indiana.

“I realized it when I was six or seven and I would collect rocks and then go out by the road and try to sell them to vehicles going by,” Phlipot said. “Of course, that was only one or two vehicles, where we lived was pretty rural. And no one ever bought them, but I guess that was when I realized I was a ‘rock hound’.”

As she grew older, Phlipot realized what she wanted to do.

“I saw people [in crystal stores] and I thought that would be a dream job,” Phlipot said. “That I would like doing something like that.”

Whether it is quartz, amethyst or crystals, which are believed to provide health benefits, Phlipot has plenty to offer — something you don’t often see in a rural community like Greenville.

Before she opened her shop, the closest crystal stores were in Dayton or Centerville.

Asked if the response has been positive, Phlipot said, “It has. I think one thing is people like not have to drive so far [to go to a crystal store]. Most of the people who come in are pretty knowledgeable. And there are others that are new to crystals. I know Greenville is looking to become more progressive and this store will help with that. It will bring some different people in.”

Phlipot, who sells items from all over the world, started her business three and a half years ago.

“I am from Indiana, but my husband is from this area so here I am,” she said with a laugh. “I started a business from my house, which was online only. Then, the opportunity came to move into the store here.”

Phlipot welcomes “rock hounds” like herself, those looking for a creative art display, or those interested in stopping in to find out more about the health benefits of crystals. The store’s website is graciousmineral.co/