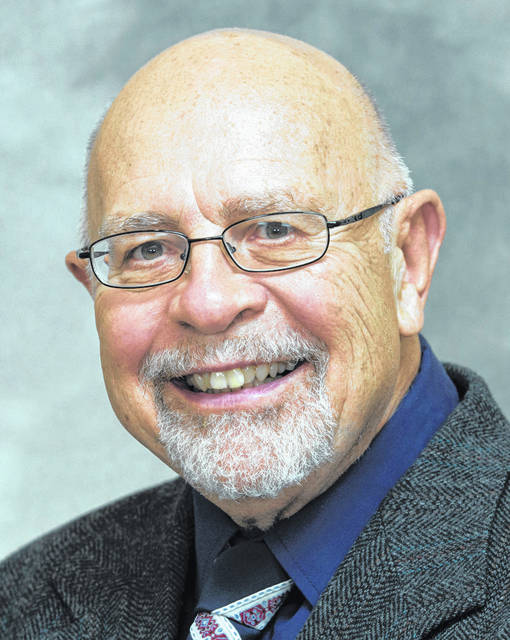 On Tuesday, my wife and I adopted a hawk named Sky at the Shawnee Prairie Preserve and Nature Center in Greenville.

Sky is a rescue bird paired with a female named Spirit.

After loggers discovered a nest with two fledglings in a felled tree two years ago, they found them a home at the nature center.

The birds soon imprinted with human benefactors, meaning they had to be reared ever after in captivity.

In the wild they would be shredded by other hawks. Used to eating food off a staffer’s glove, they surely would starve unless they approached humans to beg for handouts.

Prior to the pandemic, Sky and Spirit starred in the Center’s raptor programs.

The female is larger than Sky and dominates him. Although they do occasionally perch wing against wing, Sky usually keeps distance, said the Center’s 13-year veteran chief naturalist Rob Clifford. “Like chickens, hawks have a pecking order.”

Spirit rushes up eagerly to handlers at feeding time, while the timid Sky is a subdued, finicky eater. “He can get a little testy,” said Clifford.

Clifford thinks it unlikely the two will produce offspring, although experts he consulted said there would be no harm in them doing so despite having the same mother.

My own interest in hawks goes back to my youth and my passion for the poetry of Robinson Jeffers, a California bard whose major symbol was the hawk.

His “Hurt Hawks” was a first-person narrative in which Jeffers fails to rescue an injured bird. It is tormented by growling curs that dare approach only so close to that terrible beak. Nonetheless, as the bird deteriorated, the poet realized his mission is to deliver “a lead gift.”

He wrote these stunning lines: “I’d sooner, except the penalties, kill a man than a hawk, but the great redtail had nothing left but unable misery from the bone too shattered for mending, the wing that trailed under his talons when he moved.”

Jeffers died in 1962, but a magazine assignment brought me in 1975 to the poet’s Tor House. It contained a majestic rock tower that he had constructed out of boulders. As I toured the property with his adult son Donnan and two matched English bulldogs, I noted that high over the cliffside tower several hawks circled in search of prey.

Flash forward to 2019. I taught Outdoor Writing at Franklin College as retirement approached. I chose for a text the dazzling memoir “H Is for Hawk” by Helen Macdonald. The writer took up falconry as a way to cope with her father’s death.

Macdonald shares her experiences resisting depression while training a difficult goshawk she called Mabel. The captive resisted her attempts to return to her waiting gloved hand until one fated day.

“I called her. I had lost hope in her coming but I called her all the same. And she flew to me. She flew like a promise finally kept. She raced towards me, wings flickering across fifty yards of flint-strewn earth, hit the glove and stayed.”

I invited Roger Chastain, president of the Indiana Falconer’s Association, to give a demonstration. His hawk Tweaker charmed the students and Chastain educated them.

Last February my wife and I accompanied Chastain and other falconers on a hunt.

I thrilled to inspecting hawks close up on the falconers’ gloved fists. The birds are majestic creatures with phenomenal vision. I watched them soar to hunt squirrels in a thicket behind a shopping mall. One came so close to my head he nicked an ear.

All that may tell you why I was so excited to adopt Sky.

After signing the papers, I accompanied my wife to an exhibit housing Sky and Spirit. We passed a field vibrant with wildflowers and Eastern Tiger swallowtails. Climate change in Ohio has been hard on this species, and it was great to see them making a comeback.

My wife wanted to take photos and visited all three open sides of the exhibit. Sky’s brilliant yellow eyes followed her. Hawk necks swivel 360 degrees, a blessing that helps them hunt but also evade attacks as well.

Looks like I’ll make many more treks to the Center to see Sky. 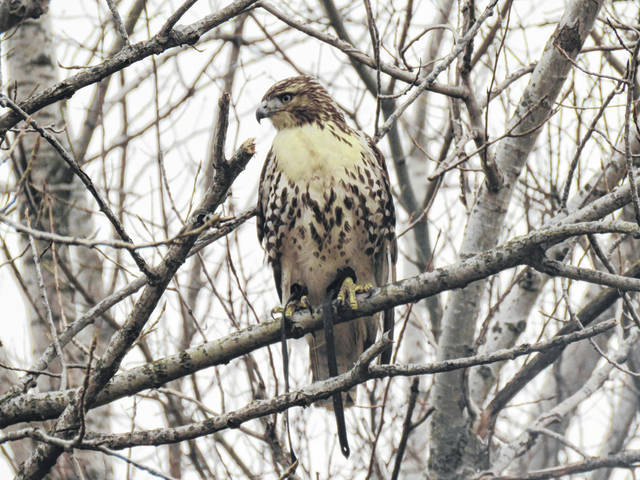