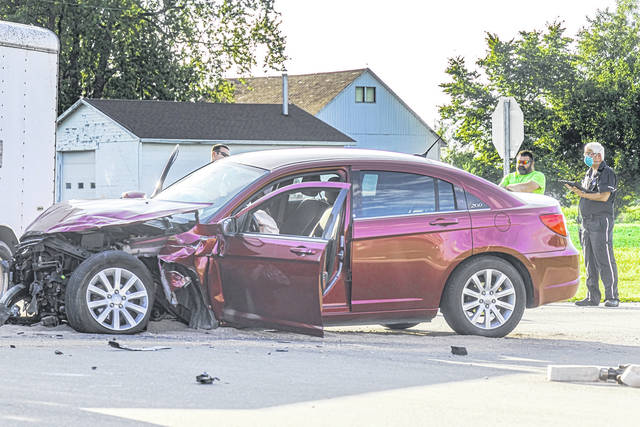 VERSAILLES — A Greenville woman was injured Tuesday evening after being involved in a two-vehicle crash that led to the shutdown of State Route 47.

At approximately 6:38 p.m., emergency personnel from Versailles Fire and Rescue responded along with deputies from the Darke County Sheriff’s Office to the intersection of State Route 47 and Conover Road in reference to an accident with injury. According to deputies, a maroon 2002 Ford F-450, driven by Robert Monnin, 43, of Russia, was traveling South on Conover Road. Monnin stopped at a posted stop sign at the intersection of State Route 47 before failing to yield the right of way from the stop sign traveling into the pathway of oncoming traffic. A utility trailer being pulled by Monnin’s vehicle was struck by a maroon 2013 Chrysler 200 driven by Emily Hutchinson, 30, of Greenville, who was traveling westbound on State Route 47.