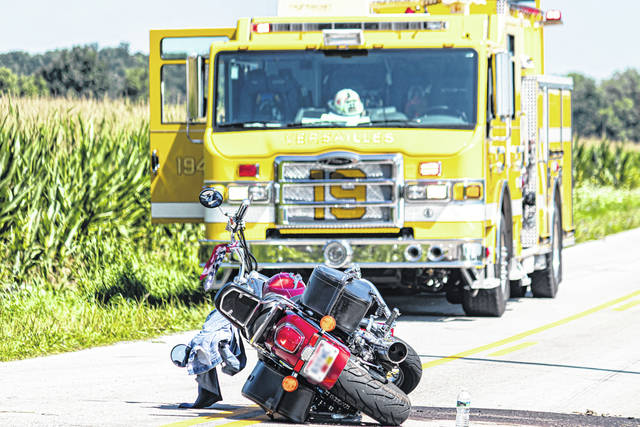 VERSAILLES — Two people suffered injuries Saturday morning in a motorcycle-related crash that resulted in a Covington woman being airlifted.

At approximately 10:48 a.m., emergency personnel from Versailles Fire and Rescue responded along with deputies from the Darke County Sheriff’s Office to the intersection of Beamsville-Webster Road and Boyer Road in reference to a motorcycle-related injury accident.

According to deputies, a preliminary investigation into the incident has revealed that a 2007 Red Polaris Ranger, driven by Rachel Schrader, 29, of Bradford, was traveling east on Beamsville Webster Road. Schrader slowed in an attempt to make a left-hand turn northbound onto Boyer Road when she was struck by an eastbound 2003 red Honda Motorcycle, driven by Brian Voisard, 28, of Covington. Voisard was attempting to pass Schrader when the accident occurred. Both Voisard and a female passenger were thrown from the motorcycle as a result of the impact.

Voisard’s passenger, Samantha Voisard, 36, of Covington, was treated on the scene by Versailles Rescue prior to being driven to the Darke County Airport to an awaiting CareFlight crew. She was transported to Miami Valley Hospital where her condition remains unknown. Mr. Voisard was transported to Wayne HealthCare for further treatment and evaluation. Schrader was treated and released at the scene, refusing any further treatment and transport to a medical facility.