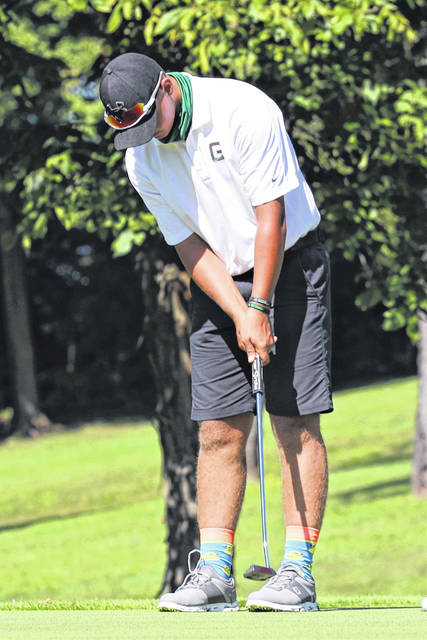 “It was great for all the kids to be able to get out and compete,” said Greenville coach Brian Stickel. “Weather was just fantastic and all the teams enjoyed the day.”

The Green Wave finished with a 349 team score while Tippecanoe finished in first place with a 334, Troy took third with a 359, Sidney place fourth at 409 and Piqua finished fifth with a 416.

“I know the guys were not happy with their scores, especially the A team, but that’s golf,” Stickel stated. “I know they will work hard to get better. Some days everything goes your way and others is doesn’t. Unfortunately we didn’t putt well and I know that will improve.”

For most of the schools, it was the first time back in official school-sanctioned competition since late in the winter season as the entire spring season was canceled due to the COVID-19 pandemic.

With the MVL recently announcing that it would play a league-only schedule in all fall sports for the 2020 season, only MVL teams already scheduled to participate were permitted to compete in the Greenville tournament accounting for the smaller number of schools attending.

Tippecanoe’s Nathan Gagnon posted the only sub-80 score on the afternoon, finishing first individually with a 76.

“I think all boys were nervous with first match jitters,” Stickel said. “The more holes they played the more relaxed they were.”

“We had some guys on the B team playing in their first match ever,” Stickel noted. “They learned a lot today. They will only get better with more experience.”

“Overall we are really looking forward to this year,” concluded Coach Stickel.” We have some experience coming back but we have to continue to work hard and get better every day.”