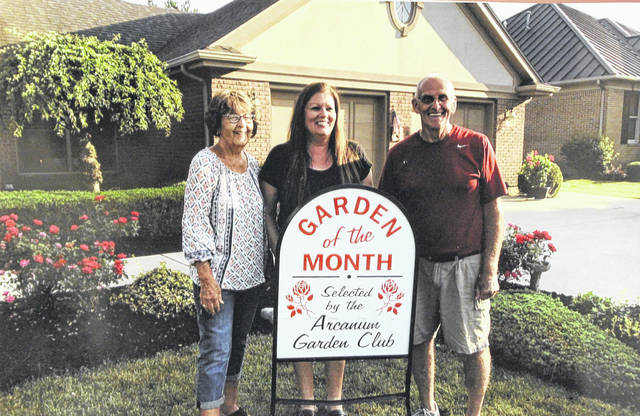 ARCANUM — Tyra and Monte Clark’s residence on Parkdale Drive, Arcanum, was chosen by the Arcanum Garden Club as the June Garden of the Month. Their immaculate landscaping and beautiful display of roses and other flowers gave a prolific view of their residence.

“We would like to thank the Arcanum Garden Club for selecting us as Garden of the Month,” Tyra and Monte noted in a written statement. “For Mother’s Day, my daughter, Tara Caldwell, and her husband, Matt, brought a beautiful basket of Wave Petunias in shades of pink and white picked out by my grandsons Griffin and Rylan. They knew their granny liked pink flowers!”

The couple confirmed that they purchased a majority of their annual flowers from Fourman’s Variety Store in Arcanum, which include New Guinea Impatiens, a variety of mixed impatiens, pink Geraniums, and some ferns located in their backyard. Their perennials include Pink Knock-Out-Roses, Purple Clematis, Golden and Red Coral Bells, Tiger Lillies, and Day Lillies.

Tyra and Monte also have a variety of herbs, peppers, and tomatoes scattered throughout their landscaping.