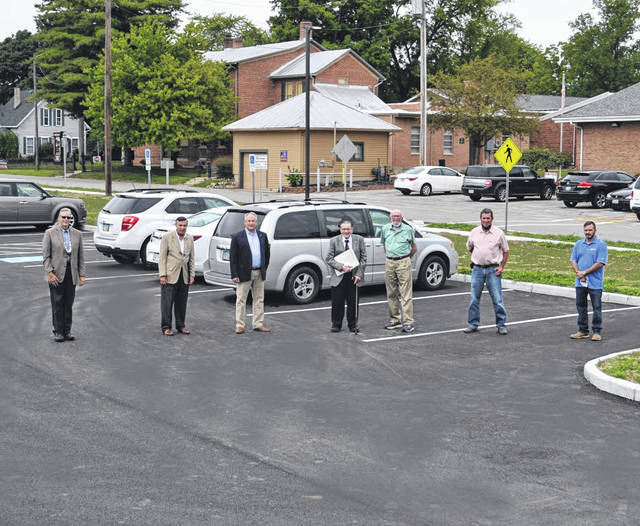 GREENVILLE — On Friday, August 14, 2020, Garst Museum celebrated the near completion of its new parking lot by recognizing the people who helped make it a reality. Keith Faber, Ohio Auditor of State, presented Dr. Clay Johnson, President and CEO of Garst Museum, with a certificate of dedication for the new parking lot and also recognized Darryl Mehaffie, emeritus board member of the Darke County Historical Society, as one of Ohio’s finest citizens, for his many years of devoted service to his community and the state of Ohio.

The project began after the century-old Buchy’s plant was razed in 2012. On March 23, 2015, John Marchal and Pete Hemer met with Louis Bergman at Mote and Associates to “get down and dirty” about a parking lot at Garst Museum. Garst Board Committee members led by Pete Hemer, Darryl Mehaffie, Steve Gruber, and Garst CEO Dr. Clay Johnson prepared for the project and secured funds from grants and donations to finance it. The Ohio Facilities Construction Committee awarded $150,000 to partially fund the project; a private benefactor, who wished to remain anonymous to direct the focus to the future of the community and the Museum, donated monies; and the Buchy family made a valued contribution to the project.

The Museum worked closely with the Darke County Park District and County Engineer’s Office to assimilate the parking facility into the surrounding lands to benefit future generations. The comprehensive plan will make efficient use of the property and enhance the aesthetics of the North Broadway thoroughfare. Today, just a few final touches need to be added and then the parking venue will be an essential part of the Museum’s operations and events.

In 1870, George Buchy fled the Alsace-Lorraine region when it was invaded by Germany and immigrated to the United States with the equivalent of 85 cents to his name. He continued his travels from New York to Pittsburgh along the Ohio River then to the Miami Valley while working as a butcher, and eventually he was employed in Greenville in 1871 by his relative Albert Klee, who was operating a slaughterhouse. Seeking the entrepreneurial experience a few years later, George ventured out on his own in 1878 and eventually expanded his business, the George Buchy Slaughterhouse, with the brick building. But, upon his death in 1897, the business was sold to Albert Bailey.

Wanting the business to remain in the family, George’s son Charles quit school, saved money, and, in 1901, borrowed additional funds to buy the business back. In 1963, his son, George J., became the third Buchy to steward the company. The company continued to evolve with the addition of a freezer, a computer system, and a more diverse customer base. Jim, the fourth-generation Buchy to be involved with the business, started doing odd jobs at the plant when he was 12, and became president in 1978. Jim also served Greenville and the state well as a 12-term member of the Ohio House of Representatives. n 2006, the business moved to a new building in the Greenville Industrial Park but maintained the desire to develop the North Broadway lot. Ultimately in 2012, ownership of Buchy Food Service was transferred to Sysco Cincinnati—thus, ending an era.

He has stated, “I firmly believe there will be a revitalization of downtown Greenville. If patience prevails, I envision businesses growing on Broadway. And we have a beautiful park. Gosh, I love that park…[and] Garst Museum is a great asset to our community.” Now, Buchy’s North Broadway plant has evolved to become a much-needed landscaped parking area to serve Garst Museum and a biking/walking path. The Garst Museum is located at: 205 N. Broadway, Greenville, OH 45331 phone: 937-548-5250 website: www.garstmuseum.org