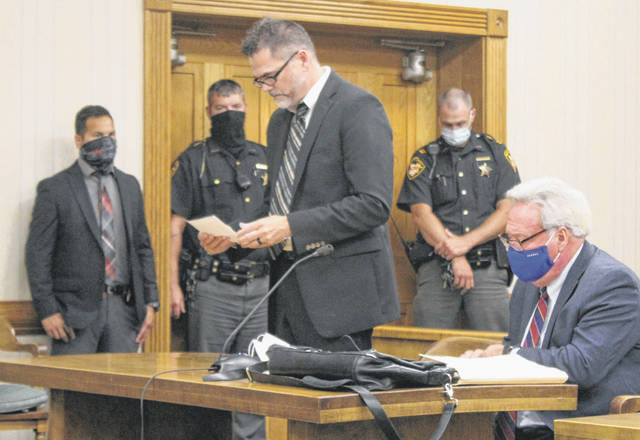 McDaniel previously pleaded guilty to 14 third-degree felony counts of sexual battery, in which he knowingly coerced a minor into performing sexual acts.

The hearing began with Judge Stevenson going over the sex offender registration requirements, and noted that McDaniel will now be labeled as a tier three sex offender.

Following this, McDaniel rose to address the court, teary eyed and visibly upset.

“Never could I have imagined that this series of events would cause such a tragedy,” McDaniel said. “I can only imagine the pain that I’ve caused from this, and I’m truly sorry. I pray that someday you [the victim] can find it in your heart to forgive me.”

He continued, “…to my colleagues and my community, I took an oath of office to uphold the laws of the state, and much trust was given to me both on and off duty. I hope that you too can forgive me for this great betrayal.”

Lopez, McDaniel’s attorney, briefly remembered his past experiences with McDaniel, and said that he had always found him to be a wonderful man and that he was surprised to hear the charges against the former officer.

“When I heard what had happened here, I was shocked, absolutely horrified, because it’s so inconsistent with his character,” remarked Lopez.

“I know he has genuine remorse for what he did,” Lopez concluded. “Shannon is a good man who made a horrible mistake.”

Mercer County Prosecutor Matthew K. Fox deferred his initial time to the victim for her statement.

“He [McDaniel] scared me like no one had ever scared me before,” she stated. “When he stopped, he told me not to say a word to anyone.”

The victim continued to outline her past experiences with McDaniel and how she worked up the courage to come forward, even when scared.

“I was afraid to tell anyone, or even talk to anyone about him.” she said. “I didn’t think anyone would believe me, and I was afraid of what he would do to me because he was a police officer. Shannon kept forcing me to have sex with him almost everyday.”

She concluded, “…you [McDaniel] manipulated me, controlled me, and raped me. You [McDaniel] put a terrifying fear in my heart that remains today. It is painful to remember every single thing that you did to me. I am asking that you [the court] give Shannon McDaniel the maximum penalty for the aggravated assault of raping me daily.”

“Nobody is a better advocate than [the victim],” Fox noted. “In my estimation, Mr. McDaniel held a position of public trust in this community as an officer of the law. His obligation was to bring offenders like himself to justice. In this case, we have an established pattern of sexual abuse… for the nature of the convictions for which the defendant stands to be sentenced, the State of Ohio advocates that the court pronounce lengthy, consecutive prison terms for this offense.”

Judge Stevenson noted that the court took McDaniel’s statements, all statements on his behalf, and the prosecution and victim’s statements into consideration.

“The court finds most aggravating that this happened again, and again, and again,” Stevenson said. “You could have, and should have, never let it happen at all… accordingly, it is the sentence and order of this court that you serve 12 months on each count, with each count to be served consecutively, for a total of 168 months, or 14 years.”

McDaniel was taken into custody by officers following the sentencing.