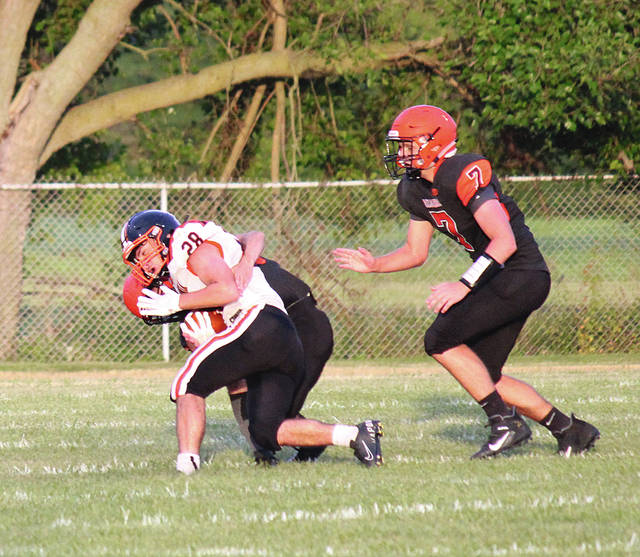 BRADFORD — The Ansonia football team got the season off to an impressive start, while Bradford showed progress from a year ago in the Tigers 40-6 win in CCC action Friday night.

Ansonia went 59 yards on the opening drive of the game, with Reece Stammen picking up the big yards.

Connor Schmit added the PAT kick to make it 7-0 with 7:12 remaining in the first quarter.

On its next possession, Ansonia went 85 yards in 11 plays.

On a fourth-and five from its own 45, Ansonia kept possession when Stammen ran 15 yards to the Bradford 40.

On the next play, quarterback Isaac Barga connected with Peyton Beam for a 40-yard touchdown pass and Schmit’s kick made it 14-0 with 9:51 remaining in the second quarter.

Stammen then intercepted a pass and returned it to the Bradford 28-yard line, leading to the Tigers’ third score of the game.

Exzavier Moody had runs of 11,8, 7 and 7 yards on the drive to help overcome a penalty, before Stammen ran it in from two yards out. Schmit’s kick made it 21-0 with 5:07 remaining in the half.

Moody would added a 15-yard TD run just before the half and the PAT failed, giving the Tigers a 27-0 lead at the break.

Barga and Beam hooked up on for another TD early in the third quarter.

Beam did a great job getting a foot down in the back of the end zone on a 24-yard pass on fourth-and-13 play.

Ansonia’s final touchdown came on a four-yard run by Moody and Alliyah Hall’s PAT kick made it 40-0.

But, there was no quit in the Railroaders.

Following the kickoff, Connor Jones had runs of eight and 14 yards to move the ball to midfield.

Unofficially, Stammen finished the game with 113 yards on 20 carries, while Moody had 78 yards on nine carries.

Beam had three catches for 77 yards and Garrett Stammen had a 20-yard reception.

Jones led the Bradford rushing attack with 51 yards on 12 carries, while Tucker Miller had three carries for 26 yards.

Felver completed five of nine passes for 74 yards with one interception, while Monnin caught two passes for 59 yards.

ANNA — Versailles rolled to a 34-14 victory over the defending state champions.

Landon Henry led the way with 155 yards on 21 carries, while quarterback Carson Bey rushed for 93 yards on 16 carries and completed three of six passes for 37 yards, with one interception.

Jack Osborne opened the scoring for Versailles with a 24-yard TD run, while Bey scored on a 14-yard keeper to make it 14-0.

Following Jacob Carman’s interception, Bey scored on a 1-yard run to make it 21-0.

Henry and Osborne both added five-yard TD runs in the second half.

Osborne added 46 yards on six carries for the Tigers. 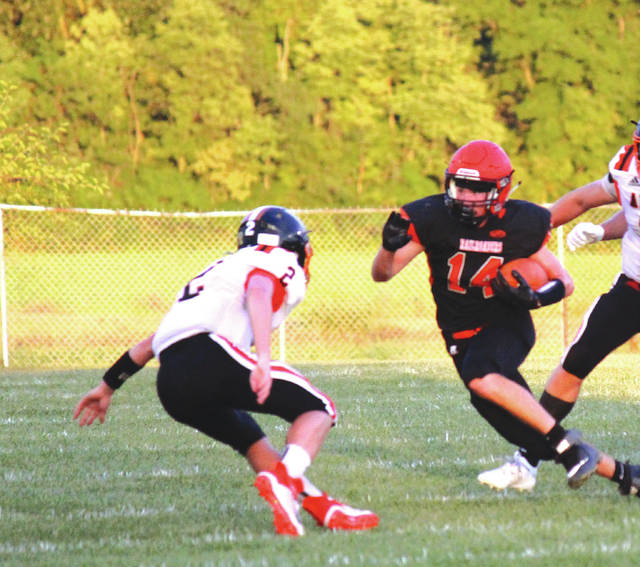