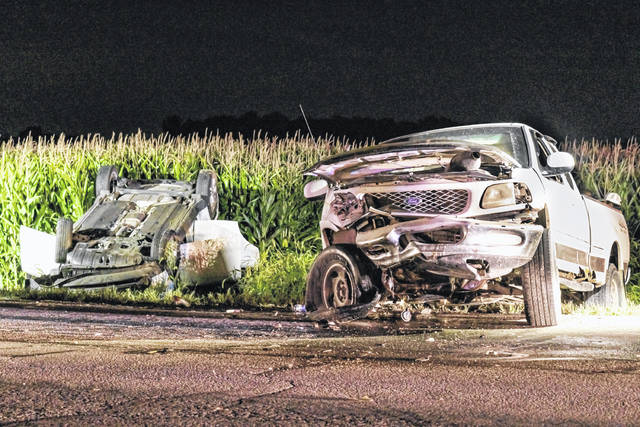 ANSONIA — A young child was airlifted from the scene of a two-vehicle crash Saturday evening that resulted in multiple injuries.

At approximately 8:41 p.m., Ansonia Fire and Rescue along with mutual aid from Union City Rescue, Greenville Township Rescue, and CareFlight, responded to the intersection of State Route 49 and Beamsville Union City Road in reference to a two-vehicle injury crash with possible entrapment.

Preliminary investigation by Darke County Sheriff’s deputies revealed that a white 1998 Ford F-150, driven by Enrique Rivera-Perez, 24, of Union City, Ohio, was traveling east on Beamsville Union City Road when he failed to notice and pulled into the pathway of oncoming traffic. The F-150 was struck by a 2015 Kia Soul, driven by Megan Finch, 44, of Ridgeville, Ind., who was traveling north on State Route 49. Both vehicles traveled off the east side of the roadway where the Kia rolled at least once coming to rest on its top along the edge of a cornfield.

Rivera-Perez, as well as an unrestrained juvenile passenger, were treated on the scene for non-life-threatening injuries prior to being transported to Wayne HealthCare for further treatment and evaluation. Finch was also treated on the scene for non-life-threatening injuries and transported to Wayne HealthCare. A juvenile passenger in Finch’s vehicle was transported to Dayton Children’s Hospital by CareFlight where the child was listed in stable condition.

Authorities on the scene state that Rivera-Perez, who is believed to have been driving without lights on at the time of the incident, could be facing multiple charges stemming from the crash. Those charges include, but are not limited to, driving without a license.