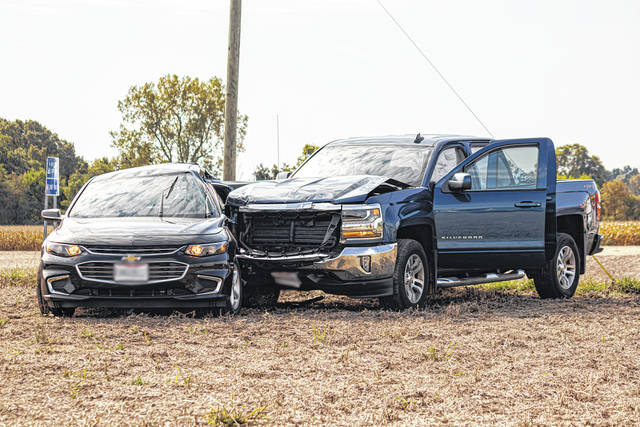 GREENVILLE — A female driver was airlifted to the hosital late Saturday morning following a serious two-vehicle crash on the outskirts of Greenville.

At approximately 10:42 a.m., emergency personnel from Greenville Township Fire and Rescue responded along with deputies from the Darke County Sheriff’s Office and CareFlight to the intersection of State Route 502 and New Madison Coletown Road in reference to a two-vehicle crash with injuries.

According to the Darke County Sheriff’s Office, preliminary investigation revealed a black Chevrolet Malibu, driven by Jennifer Champ, 53, of Akron, Ohio, was traveling eastbound on New Madison Coletown Road when the driver of the vehicle failed to notice and yield to oncoming traffic. The Malibu pulled into the pathway of and was struck by a blue Chevrolet Silverado, driven by Shawn Hartsock, 39, of Union City, Ohio, traveling south on State Route 502. The collision resulted in both vehicles coming to rest in a field located at the southeast corner of the intersection.

Champ was extricated by non-mechanical means from her vehicle prior to being treated on the scene by Greenville Township Rescue for what were described as non life-threatening injuries. Champ was then airlifted by CareFlight to Miami Valley Hospital where her condition remains unknown at this time.

Hartsock, who was uninjured in the crash, was examined on the scene by Greenville Township Rescue before refusing any further treatment and transport to a medical facility.