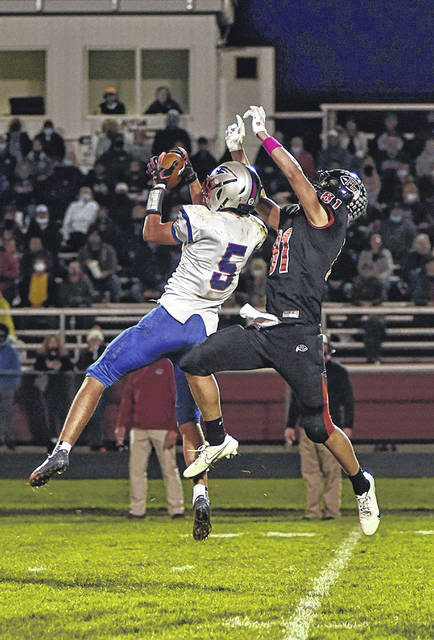 FORT LORAMIE – Tri-Village against what many thought were insurmountable odds stunned Fort Loramie by way of a 60-43 win to claim the last ever Cross Country Conferencefootball championship.

Fort Loramie had a 27 game league win streak and 2 straight conference titles. Returned 15 seniors, 11 of them starters from last year and nearly double the roster of Tri-Village. They beat the PATS 47-6 last year ¬ and lost by just a field goal in overtime to eventual state champion Marion Local in the OHSAA regional finals. The Redskins marched through the regular season with convincing wins over traditional football powers Covington 41-7 and Miami East 47-0 on the way to a 5-0 record to set-up the showdown with Tri-Village in the first ever head to head championship game.

Tri-Village was a start-up football program just 5 short years ago and had their first full varsity season 4 years ago and CCC full schedule just 3 years ago.

Junior High Head Coach Mark Moses and Junior High Assistant Coach Dale Ary have all put in a tremendous amount of time preparing the Patriots for this moment.

Tri-Village earned their way coming with a 5-0 record and averaging 50 points a game behind an exciting offense led by junior quarterback Layne Sarver and freshman running back Reed Wehr.

But the naysayers and sports writers, including this one had questions about the stamina of playing a team with the depth and experience of Fort Loramie and whether they could play a complete game.

Tri-Village wasted little time showcasing their offensive talent and on just the 3rd play of the opening possession Wehr went around the left end and raced 79-yards untouched putting the PATS up 6-0 to start the game.

Loramie answered with a 65-yard drive capped off on a 22-yard TD reception by Nate Meyer and the extra point kick was good to put the Skins on top-7-6.

TV would eventually win the battle of turnovers … but the Redskin intercepted a pass in Patriot territory stopping a drive.

Loramie then put together an impressive drive and just when it looked like they would score Sarver jumped the inside route of receiver Logan Eilerman picking off the pass by Moore and then he would turn it into a 91-yard score turning the momentum back to the Patriots.

Sarver then connected with Justin Finkbine on a pass for the two-point conversion for a 14-7 lead.

Tri-Village stopped Fort Loramie on the next possession when freshman Tanner Printz intercepted a pass at the goal line to set-up the Patriots next drive at the 20-yard line.

Tri-Village was stopped on downs at the Loramie 20 yard-line stopping the Patriots from going up even more.

The Fort then made short work on that possession after a 52-yard run by Moore, Max Hoying took it in from 5-yards out to tie the game 14-14 to end the 1st quarter.

TV was unphased and quickly moved the ball downfield with Sarver taking it in from one-yard out for the TD and the two-point conversion pass to Josh Scantland put the PATS up 22-14.

Loramie behind a Hoying 25-yard run and two-point conversions knotted the score at 22-22 at 5:57 of the second quarter.

By now it’s looking like neither team can stop the other offensively.

Reed Wehr struck again this time going off-tacklethen breaking a few tackles along the way including a spin at the one yard line and diving across the goal line for a 36-yard score making it 28-22 with two-minutes to go in the half.

There was plenty of time for Fort Loramie as Moore connected with Sam Barhorst for a 15-yard TD to go up 29-28 with 48 seconds left in the half.

On the ensuing kick-off Wehr settled under it slipped a tackle and got to the sidelines and by now the speedy freshman has become a nightmare to the Fort as he raced the rest of the way for a back breaking score to end the half with Patriots leading 34-29.

Tri-Village scored 5 touchdowns in the first half against a starting defensive unit that had given up one touchdown all year prompting many to start saying the team who has the ball last would win the game.

The question others had on their mind … can Tri-Village play a full game and not wear down?

The Skins took the first possession of the second half and marched straight down the field by just running the football looking to try and wear down Tri-Village a strategy many onlookers at Fort Loramie expected them to do to re-take the lead 36-34.

It didn’t take the Patriots long to answer the bell, once again it was Wehr going in from 27-yards out and it was 42-36.

The high powered ground game of the Redskins marched back down the field to respond and Moore went in from 3-yards out and now it was 43-42.

It was like a pinball machine with the lights flashing and blinking all over as the scoreboard kept changing going back and forth on the night.

The Patriot shot back into the lead taking just a couple of minutes with Sarver on a 4th and one reaching across the goal to regain the lead 48-43 with 8 minutes to go in the 3rd quarter.

This is the point in the game one might expect the more experienced size and strength of the Redskins to start dominating the game … but someone never told the interior lineman on both sides of the ball of Tri-Village they were supposed to roll over.

The Patriots stiffened and helped tilt Loramie pinball machine when their defense stopped a fake punt at critical time in the game, then held the Skins scoreless the remainder of the game.

The defensive line behind juniors Seth Wogoman, James Penny, sophomore Christian Cantrell and senior Dylan Finkbine went toe to toe doing the little things upfront most don’t see to allow the linebackers and safeties to do their jobs.

“Dylan is one of our key guys up front and one who has been with me the whole time in my 4 years here at Tri-Village. He was second team all-state last year and his impact doesn’t always show up in the stats. He really is our engine and our most reliable guy. He got good pressure for us Friday and all the d-linemen did a great job of erasing their screen game. They completed one screen for like 4 yards and had to eat the rest because those guys up front played with discipline. We knew it’d be a battled every snap and our guys lived by that mantra. We lost some and kept coming back to play the next down and I’m so proud of those guys,” Tri-Village coach Robert Burk praised.

The Patriots scored once again behind Sarver a 2-yard to go up 54-43 and you could feel a big gasp coming from the stunned Loramie faithful with 8 minutes to go.

Tri-Village wasn’t finished yet as they would put up one more score behind the offensive line who also answered the question of being able to play a whole game and not wear down.

“I believe our line proved they can play against anybody. They do a great job of getting to people and being physical every snap. Our offensive line has given up 1 sack all year and gave up 0 Friday night,” Burk beamed.

“We have great athletes, but we knew we had to at minimum match Loramie at the line of scrimmage and we were able to do that. The best part is we bring back all 5 starters next year. They are a really close knit group who just go play for each other and I’m so proud of them,” Burk exclaimed.

That line helped add one more touchdown as Sarver took advantage of an opening and did the rest with his feet on a 41-yard scamper to put an exclamation point on the game to give the Patriots 60-43 win over the highly favored Fort Loramie squad.

Due to Covid all teams are automatically entered into the OHSAA football playoffs and Tri-Village will get a bye this week. They will play the following Friday October 16th against the winner of Cincinnati College Prep vs Twin Valley South at Tri-Village at 7pm.

With the victory over the No. 2 D7 stated ranked team they should move up from their 4th spot but more importantly it answered the question that many had of them being able to overcome the odds.

“Odds, what odds said Burk, we felt we were just as good as they were, it’s wasn’t a surprise to us.”

“We’ve put in a lot of hours and I’ve asked a lot of people to sacrifice a lot of things. Parents, the great administration that hired me…they had the vision we were going to do this.We had a lot of people who believed in us for a long time,” Burke said.

And for this reporter who questioned, well I’ll eat crow, and it’s never tasted better as the Patriots answer the question … odds, what odds? 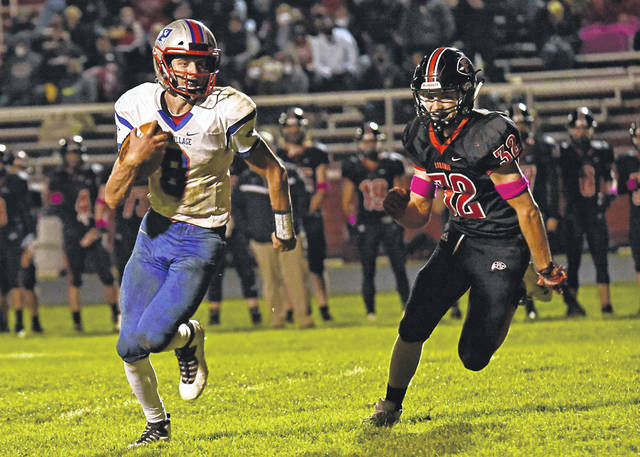 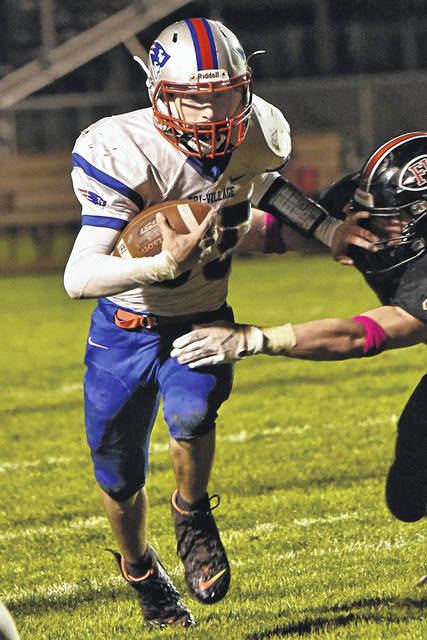 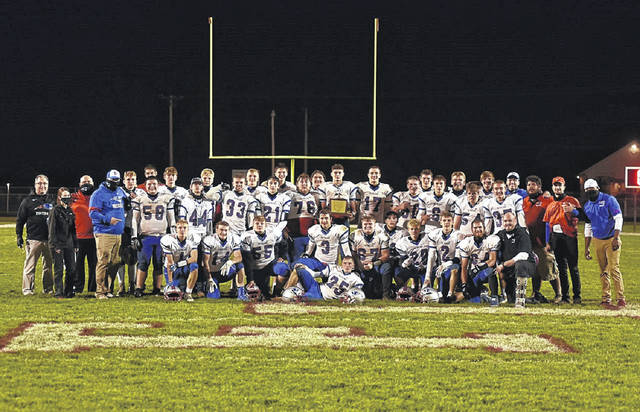 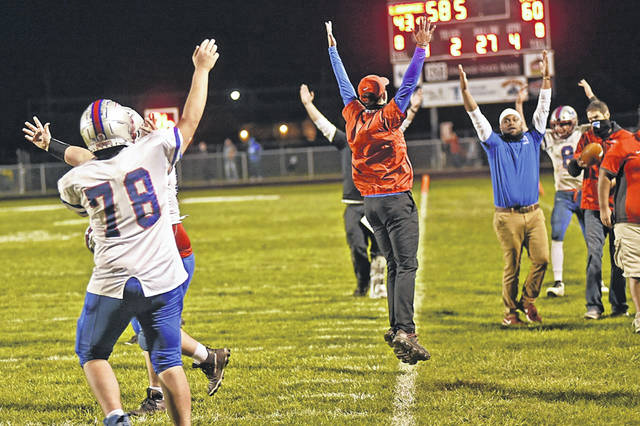 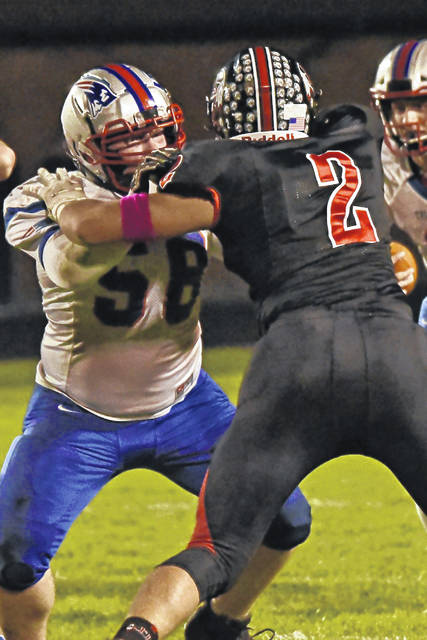 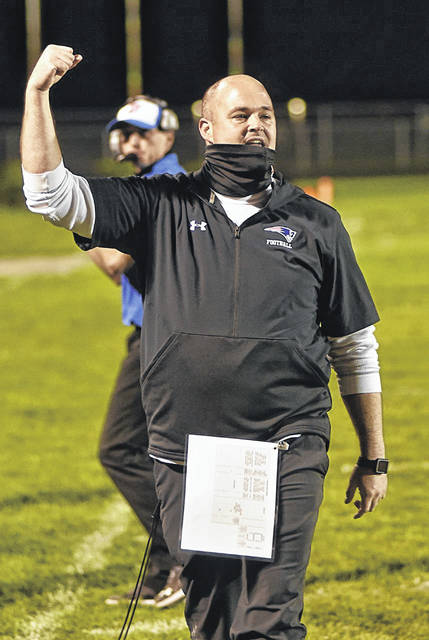