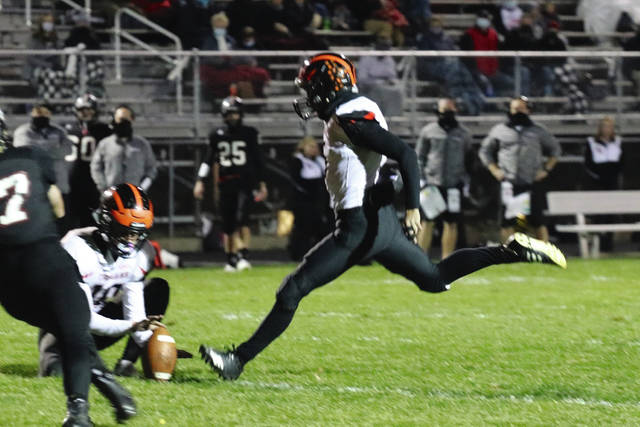 It was another amazing performance by sophomore quarterback Bryce Schondelmyer and his receiving corp — along with a stout effort by the Trojan defense against the Covington offense.

But, the Buccs were able to mount to scoring drives in the final four minutes and finish the game with 23 unanswered points and escape with a 30-24 win over the Trojans.

Covington improves to 5-2 and will travel to West Jefferson for a regional quarterfinal game Saturday night.

Arcanum dropped to 5-3 and will close the regular season with games at Northeastern Friday and at home with Tri-County North the following week.

Junior receiver Brennan Troutwine had another big night with 12 catches for 197 yards.

Arcanum also recovered two fumbles on onside kicks and another fumble at the Covington 10.

All that led to a 24-7 lead late in the third quarter.

But, the inability to run the ball stopped the Trojans from closing out what seemed like an almost certain playoff win.

With Arcanum still leading 24-14, the Trojans were stopped on a fourth-and-one at the Covington 31 with a little over four minutes remaining.

After a pass interference gave Covington a first down on the Arcanum 29, Wagoner passed to Deacon Shields who made an amazing grab as the ball dropped down between his legs as he was going into the end zone, but never hit the ground.

After a penalty on the PAT kick, Shields ran for the two-point PAT to get Covington within 24-22 with 3:06 remaining.

Covington recovered the on-side kick at the Arcanum 46.

Duncan Cooper threw a 21-yard pass to Hamilton to move the ball down to the 14.

Schondelmyer had two completions to give Arcanum a first down at its own 41, but the Trojans would turn the ball over on downs from there in a heartbreaking defeat.

Arcanum had started the game by stopping Covington.

The Trojans put together a long drive, which led to a 32-yard field goal by Joe Beck to make it 3-0 in the early going.

Arcanum would make it 10-0 on its next possession going 55 yards in nine plays.

On fourth-and-three at the Covington 28, Schondelymer found Troutwine for the TD and Beck’s PAT kick made it 1o-0 with 8:15 remaining in the half.

Beck recovered his own onside kick at the Covington 45.

Arcanum drove down to a second-and-two at the Covington six, but the drive would end with a missed field goal off the right upright.

Cooper had a 28-yard run on Covington’s 80-yard drive and halfback pass to Hamilton went for 40 yards.

Alexander would find the end zone from four yards out and David Robinson’s PAT kick would get Covington within 10-7 with 2:17 remaining in the half.

Arcanum threatened to score before the break, but Hamilton had an interception on the final play of the half.

On Arcanum’s opening possession of the second half, the Schondelmyer had a 38-yard pass to Troutwine to go deep into Covington territory.

But, after two chances on fourth down failed, Covington would take over on downs at its own three.

The Buccs fumbled on the next play, with Baker recovering at the Covington 10.

After a 12-yard loss on the first play, Schondelmyer threw a 22-yard TD pass to Troutwine. Beck’s kick made it 17-7 with 7:19 remaining in the third quarter.

It took Arcanum just 13 seconds to add to the lead.

Cameron Burk recovered an on-side kick at the Covington 49 and Schondelmyer hooked up with Baker for a touchdown on the first play. Beck’s kick put Arcanum up 24-7 with 7:06 remaining in the third quarter, but the Trojans would not score again.

Shields gave Covington hope wit ha 50-yard TD run with 39 seconds remaining in the quarter and Robinson’s kick got Covington to within 24-14.

The score remained that way until Covington’s dramatic rally at the end.

Alexander had 71 yards on 17 carries and Cooper added 62 yards on nine carries.

Hamilton had three receptions for 90 yards. 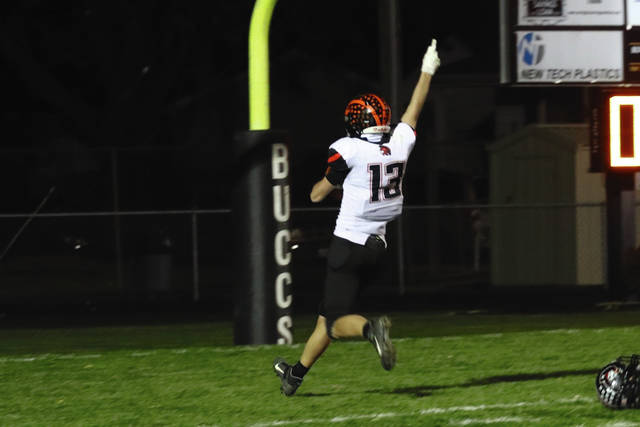 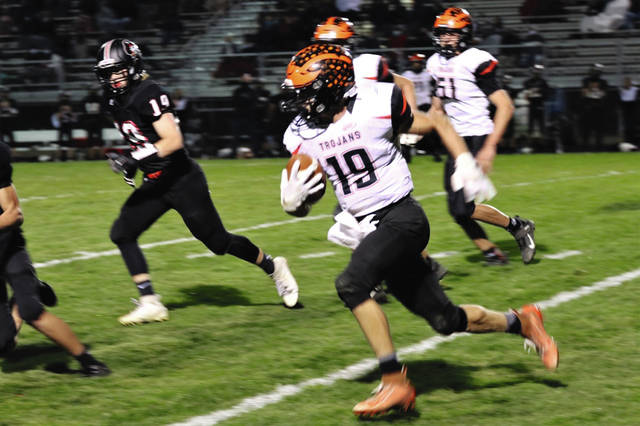 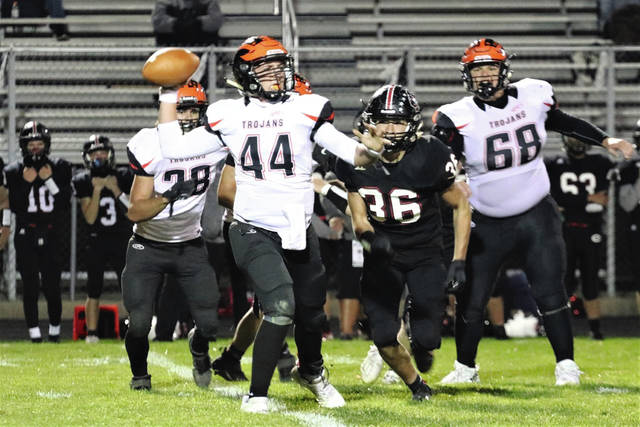