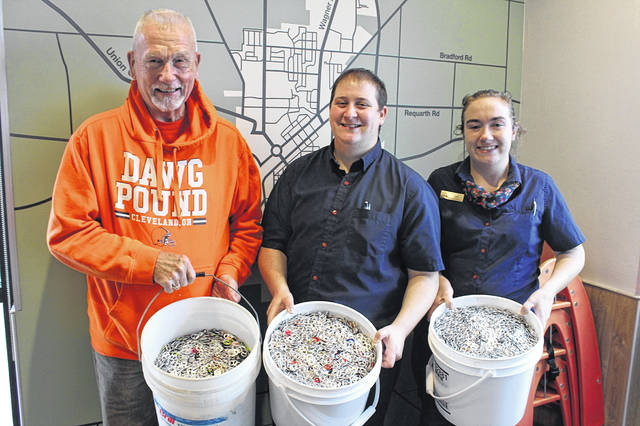 “These pop tabs are going to be for the Ronald McDonalds House Charities,” said Greenville McDonalds General Manager Waren Davidson. “They will be donated – they can help make some money for the kids.”

“Over the years we have probably donated between four and five thousand to State of the Heart,” said Scott Stahl. “We want to continue that relationship with them because they are a very worthwhile organization and do a lot of good work.”

The Union City Browns Backers, organized in 1987 number about 50 members. The group continues to support many charitable organizations each year.

“It’s fallen off a little bit mainly because the Browns are not doing to darn good but we still have fun,” Stahl noted. “We meet down at Sloopy’s (Greenville) this year.”

The pull tab donation is the second time for the Greenville McDonalds location have received the donation as well as one year going to the Union City McDonalds.

The Browns Backers will be meeting Sunday, October 25 at Sloopy’s with Browns and Bengals fans supporting their team when the Ohio teams faceoff while helping support the community.

“I want to thank Scott and his group, the Union City Browns Backer for bringing these pulltabs to McDonalds,” Davidson concluded.