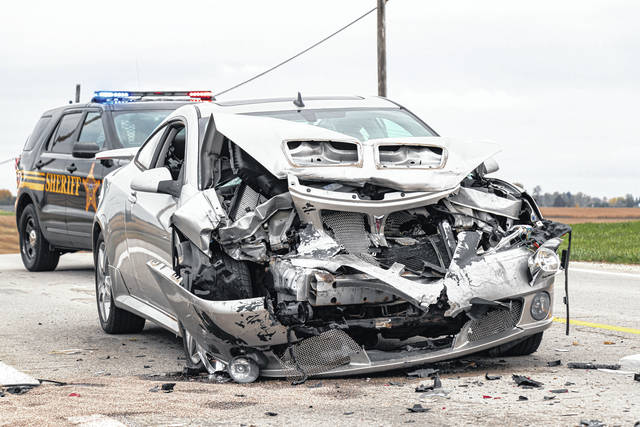 GREENVILLE — Two people were injured Wednesday evening following a three-vehicle accident on the outskirts of Greenville.

At approximately 4:24 p.m, emergency personnel from Greenville Township Fire and Rescue responded along with Darke County deputies and Ansonia Rescue to the 7900 block of State Route 118 in reference to a three-vehicle crash with injuries.

According to the Darke County Sheriff’s Office, a preliminary investigation showed a silver 2008 Pontiac G6, driven by 20-year-old Dayinaira Hall, of Union City, Ohio, was traveling northbound on State Route 118. Hall, for unknown reasons, failed to notice and stop in time before rear-ending a black 2018 Chevy Malibu driven by Kaelyn Marker, 23, of Greenville, who was stopped for the vehicle in front of her. Marker’s vehicle then struck the vehicle in front of her, which was a silver 2005 Chevy Tahoe driven by Jennifer Schlechty, 40, of Greenville, who was stopped for oncoming traffic attempting to make a left-hand turn into a private drive.

A front-seat passenger of the Pontiac G6, Dalton Hampshire, 19, of Union City, Ohio, was treated on the scene by Greenville Township Rescue prior to being transported to Wayne HealthCare for what were described as non-life-threatening injuries. Marker, the driver of the Chevy Malibu, was also treated on the scene by Greenville Township Rescue and transported to Wayne HealthCare for minor injuries. Both Schlechty, as well her front seat male juvenile passenger, were examined on the scene by Ansonia Rescue prior to refusing any further treatment and transport to a medical facility. Hall was treated and released at the scene and was issued a citation for assured clear distance ahead.