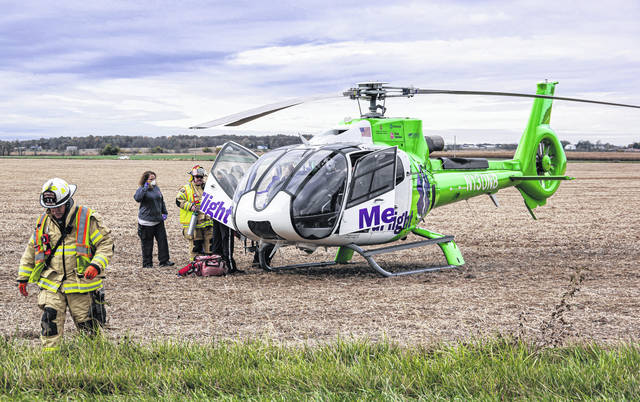 NEW MADISON — A two-vehicle crash Sunday morning at the intersection of State Routes 722 and 726 has claimed the lives of two people.

At approximately 9:53 a.m., emergency personnel from the New Madison Fire Department, Tri-Village Rescue, and MedFlight responded along with Darke County Sheriff’s deputies to the area of State Route 722 and State Route 726 on a two-vehicle serious injury crash.

According to the Darke County Sheriff’s Office, a 2014 Chevy Malibu, driven by Linda Smith, 74, of West Milton, Ohio, was traveling eastbound on State Route 722 when Mrs. Smith failed to notice and yield to oncoming traffic. Smith pulled into the intersection at State Route 726 and was struck by a southbound 2012 GMC Acadia, driven by Natalie Greene, 30, of New Madison, forcing both vehicles off the roadway coming to rest in a field.

Greene, as well as her passengers, Vincent Springer, 31, of New Madison, and two juveniles, were treated on the scene by Tri-Village Rescue for what were described as minor injuries prior to refusing any further treatment and transport to a medical facility. Marie Fine, 94, of Laura, Ohio, was extricated by mechanical means from the Smith vehicle and transported by MedFlight to Miami Valley Hospital in Dayton, where she later succumbed to her injuries. Smith succumbed to her injuries on the scene.