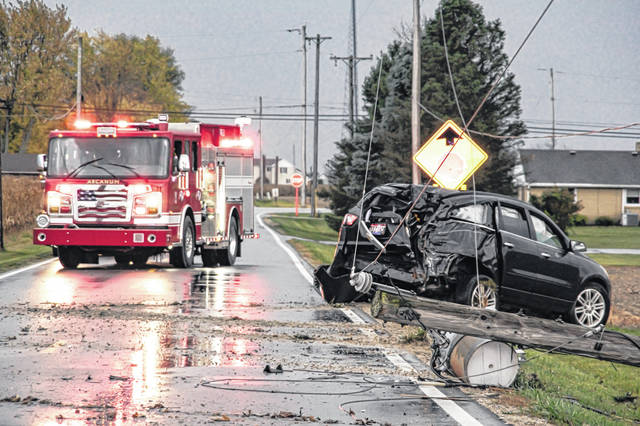 ARCANUM — A Troy man was taken into custody for the suspicion of OVI Friday evening following a single-vehicle crash that left area residents without power.

According to the Darke County Sheriff’s Office, a preliminary investigation revealed a 2014 Chevy Traverse, driven by Justin Augustine, 40, of Troy, was traveling south on Gordon Landis Road. Augustine lost control of his vehicle and drove off the right side of the roadway, striking a tree, continuing south through a private lawn, before striking a utility pole and coming to rest at the edge of a field. The crash resulted in the utility pole breaking off, leaving downed power lines across the vehicle and into the roadway. Approximately 25 area residents were left without power for multiple hours due to the crash.

Augustine was treated on the scene by Arcanum Rescue for minor injuries prior to refusing any further treatment and transported to a medical facility. Augustine was arrested for operating a motor vehicle under the influence and cited for failure to control.