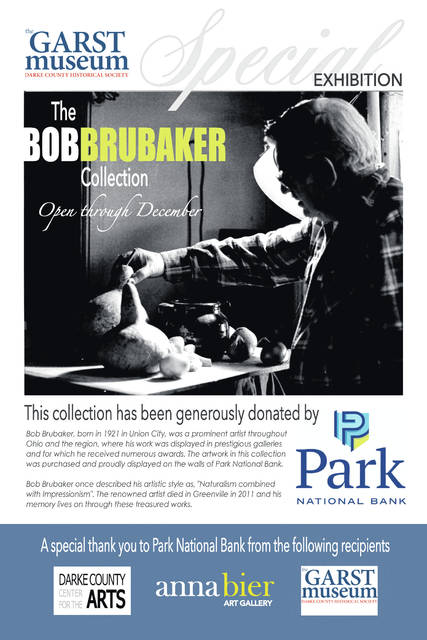 GREENVILLE — One might wonder how young Bob Brubaker was when his fingers first wrapped around the handle of a paintbrush, given the long list of artistic opportunities that seemed to manifest before him at nearly every stage of his life.

Brubaker was born in Union City, Ohio, in 1921 and, as a child, he confidently dove in to the lake of the art world to win bragging rights and a prize for his hand-drawn entry to a magazine cartoon contest. It seemed early on that fate had a highly artistic plan for him.

Brubaker was a veteran and, having been drafted during World War II, found himself supervising a dozen other artists as they drew radio circuits. A post-war job at Union City Body Company lettering fleets of school buses filled his time before establishing his own studio in downtown Greenville. It was in this 434½ South Broadway studio that Bob Brubaker became the beloved and fiercely collected fine artist and local sign painter most are familiar with.

The question that begs to be asked is how does one become a fine artist? Most would agree that it takes utmost devotion to furthering one’s craft, studying lines and proportion, and understanding the subtle tones of color. Brubaker adhered to these ideals continuously enrolling in courses of study and taking instruction from both the Dayton Art Institute and respected artists Grattan Condon, Paul Strisik, John Pike, and Don Stone. He was considered a star pupil under painter and sculptor Martin Wogoman, the principal pioneer of the Darke County Art Colony.

Study and focused practice can take an artist far. Ultimately, when individuals have the innate ability to magically capture the feeling of their subject’s soft exhale of warm breath in a portrait or to remember the fleeting, yet electrified, orange backdrop of October sunsets for a landscape, they are not simply considered masterfully artistic but, rather, master artists. After establishing the downtown Greenville studio, Grumbacher, a highly respected manufacturer of fine art paints and supplies, presented an enviable opportunity to Brubaker to provide inspired instruction to arts organizations and colleges from Cincinnati to Cleveland. The opportunity, in itself, was testament to Brubaker’s highly developed skill and natural abilities as an artist. In addition to a long list of awards, numerous solo shows and exhibitions of Brubaker’s work have been touted by respectable galleries at the University of Dayton, Oxford University, Fifth Avenue Art Gallery (Columbus, Ohio), McGuire Hall (Richmond, Ind.), and the Zanesville Art Institute.

For many years, Park National Bank (formerly Second National Bank) avidly collected the work of Brubaker to display within its downtown Greenville branch. In early October, Park National Bank generously donated 13 Brubaker watercolor and oil paintings from its collection to the Garst Museum for fundraising purposes. “We are pleased to be able to support the Garst Museum with our recent donation of Bob Brubaker pictures and know they will be used as a valuable resource for various fundraisers to generate financial support. The Garst Museum is a local treasure and their work in preserving and telling the story of Darke County and beyond is an essential part or our heritage and history,” Park National Bank President John Swallow said.

The Brubaker paintings are currently on display through a temporary exhibit inside the Lowell Thomas Meeting Room and accompany seven other paintings by Brubaker that were kindly given to the Darke County Center for the Arts’ Anna Bier Gallery by Park National Bank.

The Garst Museum invites the public to view this artful exhibit, which is on view through December. The paintings range from Brubaker’s watercolor works depicting rural farm scenes to still-life oil paintings and mesmerizing nature scenes. In his own words, Brubaker described his painting style as “naturalism combined with impressionism.” In our words, we describe Bob Brubaker as a legendary artist who immortalized the beauty of our region through a paintbrush.

The Garst Museum is open Tuesday through Saturday from 10 a.m. to 4 p.m. Masks are required.