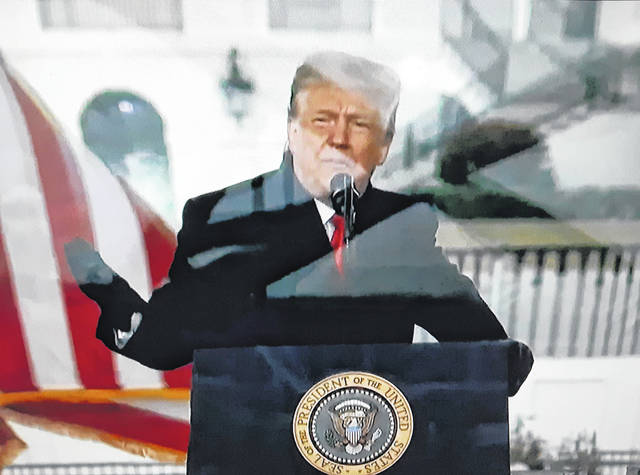 WASHINGTON D.C. — The U.S. Capitol was briefly occupied by demonstrators Wednesday following a rally in support of President Donald Trump.

Earlier in the day, the president remained defiant, telling thousands of supporters in Washington that he would not concede the presidency on the same day Congress gathered to certify the presidential electoral vote.

“We will never give up. We will never concede. It doesn’t happen. You don’t concede when there’s theft involved,” Trump said.

Trump, who has accused Democrats of committing electoral fraud in a number of states, berated fellow Republican leaders in the House and Senate for refusing to fight the results of the election, asking his supporters to challenge them in primaries.

“You have to get your people to fight and if they don’t fight we have to primary the hell out of the ones that don’t fight. We’re going to let you know who they are,” he said.

“We want to go back and we want to get this right because we’re going to have somebody in there that should not be in there and our country will be destroyed and we’re not going to stand for that,” Trump added, referring to his election opponent, Democrat Joe Biden.

Prior to overseeing a joint session of Congress, Vice President Mike Pence, in a submitted letter, said he would not attempt to prevent the certification of electoral votes for Biden.

“I do not believe that the Founders of our country intended to invest the Vice President with unilateral authority to decide which electoral votes should be counted during the Joint Session of Congress, and no Vice President in American history has ever asserted such an authority,” Pence wrote.

During the joint session, GOP Congressmen objected to certifying the electoral votes of Arizona. Vice President Pence adjourned each house to debate the objections.

However, while senators and representatives deliberated, demonstrators overwhelmed law enforcement to enter the Capitol building. The Capitol was locked down, and legislators were evacuated to safe locations.

Gunshots were reportedly fired by some sources. According to one source, one shooting victim was taken away for treatment and five others treated for injuries.

Sen. Sherrod Brown (D-Ohio) posted on his Facebook page, “My staff and I are safe. The violence at the Capitol needs to end now. The lives of countless workers – journalists, staff, and Capitol Police are being put at risk by this attack on our democracy.”

“The right to protest peacefully is protected under the Constitution but the actions by violent mobs against our law enforcement and property at the U.S. Capitol building today are not. [Pres. Trump] should condemn this unacceptable vandalism and violence,” tweeted Sen. Rob Portman (R-Ohio).

Rep. Warren Davidson (R-Troy) tweeted “I want to thank the Capitol Police for its dedicated service and for keeping everyone — from members to staff — safe. I have every confidence that they will be able to handle this situation.”

Visit Advocate360 on Facebook or www.DailyAdvocate.com for more updates.