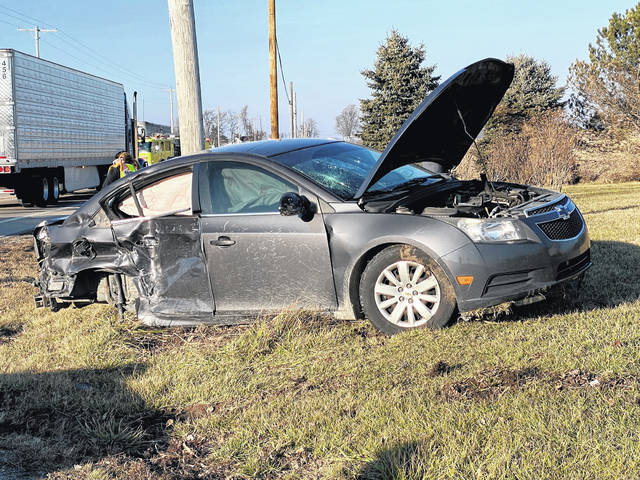 ARCANUM — An Arcanum teenager was injured in a two-vehicle crash Saturday after pulling into the pathway of a semi-tractor and trailer on U.S. Route 127.

At approximately 3:27 p.m., emergency personnel from the New Madison Fire Department and Arcanum Rescue responded along with Darke County deputies to the intersection of U.S. Route 127 and State Route 503 for a reported two-vehicle injury crash involving a semi-tractor and trailer.

According to the Darke County Sheriff’s Office, a preliminary investigation revealed a gray 2011 Chevrolet Cruze driven by Benjamin Savage, 18, of Arcanum, was traveling southeast on State Route 503 and had stopped at a posted stop sign at the intersection of U.S. Route 127. Savage failed to notice and yield to oncoming traffic, pulling into the pathway of a northbound blue 2020 Freightliner semi tractor-trailer driven by Przemyslaw Wojcik, 37, of Schaumburg, Ill. Savage’s vehicle was struck in the passenger side area by the Freightliner forcing the Chevrolet to come to rest off the roadway.

Savage was treated on the scene by Arcanum Rescue prior to being transported to Wayne HealthCare for what were described as minor injuries. Wojcik was examined on the scene refusing any further treatment and transport to a medical facility.