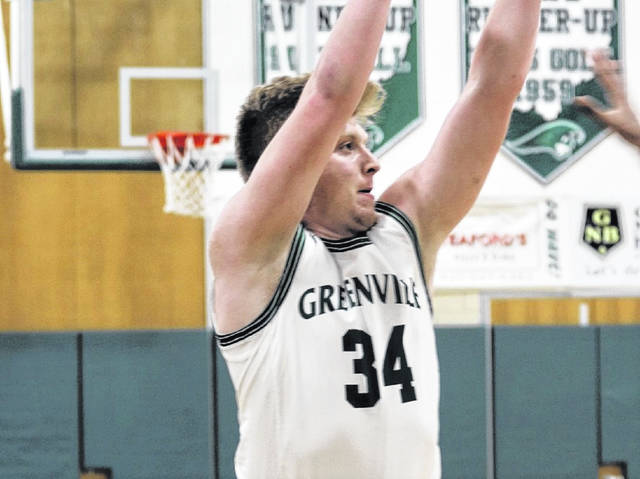 “Not having been in that situation yet on the road at Butler – Butler is a very tough place to win and then to go out and outscore Butler seven to nothing in overtime was just a credit to our kids,” said Coach Jones. “It just shows just how bad they really wanted to win.”

Butler came into the night with a 7-3 winning record and a 46-34 earlier season win over Greenville on the Wave’s home court.

“Going into the game we talked a lot about how patient and methodical Butler is on offense,” Jones said. “When they get in the half court they really don’t speed up, they work the ball for a really good shot so we had to be disciplined on defense, keep it packed in, really key on Bucchanan (6’6” senior) their big guy,” Jones said. “I thought we were pretty physical with him the entire game and they really didn’t get anything going inside in the first half.”

The teams played to a 9-9 first quarter with Jace Bunger leading Greenville with 5 points in the early goings with a 3-pointer and a 2 point basket.

“We did a good job of closing out on their shooters, keeping our defense packed in and closing down the driving lanes and made it really difficult for them to score inside on us,” said Jones. “We didn’t get too spread out on defense which was a good thing.”

The Aviators took the second quarter 11-8 sending the teams to the break with Greenville trailing 20-17. Hayden Bush and Nolan Curtis each knocked down a trey and DJ Zimmer hit his second bucket of the first half for the Wave.

Greenville battled back with a third quarter smothering defense limiting Butler to 3 points while Curtis was nailing his second triple of the night, Alex Baumgardner got on the board with a basket and free throw and Zimmer was good for a point at the charity strip to make it a 23-23 score with one period to play.

“We came out in the third quarter and had no let down defensively,” Jones stated. “We outscored them 7-3 which is nothing major from an offensive standpoint – defensively we had no falloff.”

The MVL teams matched points in the fourth quarter, each putting 13 points on the board with Curtis drilling a 3-pointer in the closing seconds to send the game to overtime tied 36-36. Zimmer accounted for a basket and 2-2 at the line, Bush and Curtis each buried a 3-pointer and Baumgardner added a basket to round out fourth quarter scoring.

“We did a much better job late in the game of executing,” Jones said. “We ran some sets to get some shots.”

“We called timeout with about 16 seconds to go and drew up an out of bounds play to get the ball to Nolan Curtis for a three and Butler bit on it. He was wide open and nailed a three to send it into overtime.”

“When you are winning games that rim looks a heck of a lot bigger than it does when you’re not winning games – and you shoot the ball with a lot more confidence,” added Jones.

Greenville owned the overtime period scoring 7 points while keeping the Butler Aviators out of the scoring column to earn the MVL victory. Curtis paced the Wave in OT play going 3-4 at the line, Bunger went 2-2 at the charity stripe and Zimmer added a basket.

“They came over to the bench and Heath Coomer, one of our senior guys said it’s time to win the war now and we outscored them 7-0 in overtime,” shared Coach Jones. “The kids really buckled down and got the job done.”

“Nolan Curtis shot the ball well for us. We had pretty balanced scoring. DJ had 11 but DJ was really playing on one wheel. He has been nursing a sprained ankle and he really toughed it out.”

“Hayden Bush stepped up and Jace Bunger did a good job of running the point for us in Reed’s (Hanes) absence. We had to spot play Reed because he is still banged up from his injury.”

“Alex Baumgardner continues to be a physical, a physical presence inside for us. We told him if we are going to have a chance to win any games, we got to have you being physical inside and making the other team’s post’s threat work for everything. Alex has become a very physical player and that is a credit to him and shows the level of toughness that we have to exhibit out on the floor as a team.”

“All things considered, with all the adversity that they are going through – to go on the road at Butler and win a tight game like that was just a credit to them,” Coach Jones concluded. “I was happy for them that they were able to hold on.”

Curtis led Greenville and all scorers with a game high 12 points in the win.