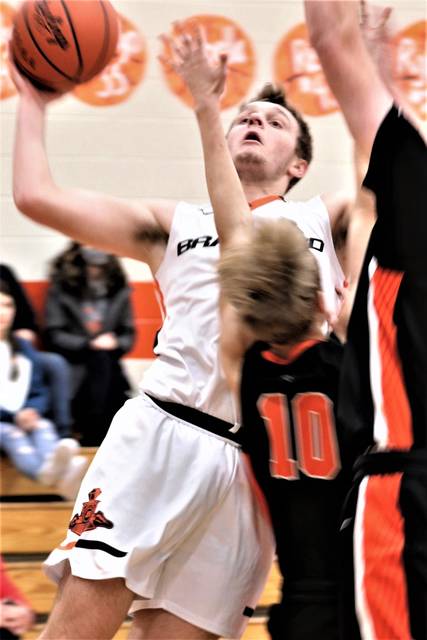 “Give Coach Hall credit – he does a heck of a job,” said Arcanum coach Roger McEldowney. “We watched them on film and they have been playing great here of late. We knew it was going to be a four-quarter game and it was.”

Arcanum took the opening period 12-7 with Jake Goubeaux pacing the Trojans with 4 points and Bradford’s Parker Davidson tossing in 4 points going 4-4 at the line.

The Trojans pushed its lead to 28-17 at the halftime break putting 16 points on the second quarter board while holding the home team to 10 points.

Davidson accounted for seven Bradford points going 4-4 at the charity stripe and a 3-pointer. Nick Sharritts paced Arcanum with 6 points.

Bradford was 5-points better than the Trojans in third quarter play taking the period 17-12 to trail the Arcanum team 40-34 heading to the final quarter of play.

Bradford ‘s Davidson once again had the hot hand for the Roaders as the 6’2” sophomore poured in 10 points on 3 baskets and 4-5 at the charity stripe. Ian Baker scored 9 points for the Trojans hitting 2 buckets and going 5-6 at the free throw line.

“Parker is very skilled and talented – I think those are separate because you need to build your skills and refine your skills,” said Hall. “He has put in a lot of time to be as skilled as he is. He gets all the credit for that. He is a large part of what we do offensively and everyone knows that.”

Arcanum picked up the pace in the fourth taking the quarter 20-8 with Ian Baker scoring 9 points for the Trojans hitting 2 buckets while going 5-6 at the free throw line while was Goubeaux adding 7-points for Arcanum.

“Our kids really responded at the end when they made a little comeback on us,” said Coach McEldowney. “Ian Baker really gave us a lift when he came back in. He was in a little foul trouble and he came back and scored some big buckets. He makes a difference when he is on the floor.”

“It was a good team effort,” added Coach McEldowney. “Obviously Jake led us again. He did a fantastic job handling the ball and scoring for us. Burke had a great floor game – got the ball where it needed to go. He takes the ball out, he’s our trigger man. He did a nice job.”

Davidson accounted for five Bradford fourth quarter points including a three and freshman Hudson Hill hit a 3-pointer for the Railroaders.

“We have a mix of young guys that I am trying to get in there and they have earned it,” Hall stated. “I trust them and they are fully capable but there is a big difference with 14 and 15 playing against 17 and 18. I am happy with the effort they give because it’s more than they have given – but I know they have more.”

“I also know they are capable of more,” continued Coach Hall. “They have more in the tank than they realize. I know where they’ve been and I know where they’re at, but I also see where they can go. I don’t know if they have as much belief in themselves as I do right now and when they do we are really going to take off.”

Davidson led Bradford and all scorers with a game high 26 points. Goubeaux logged 22 points for Arcanum. 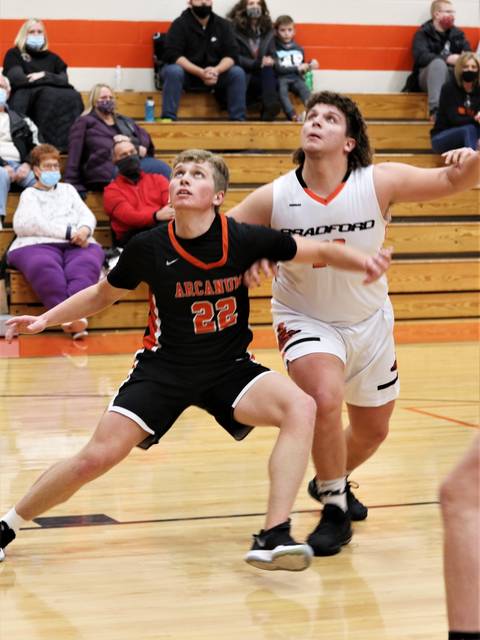 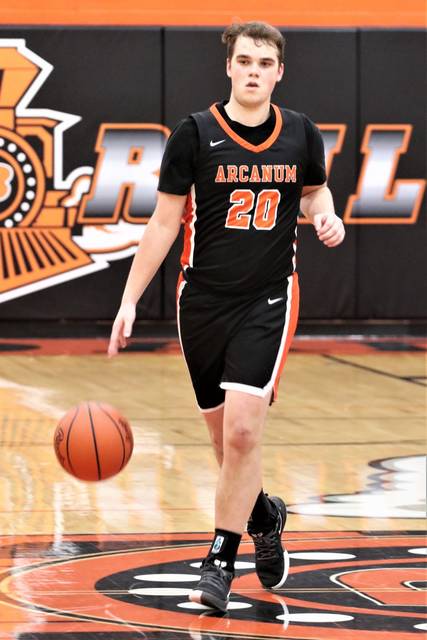 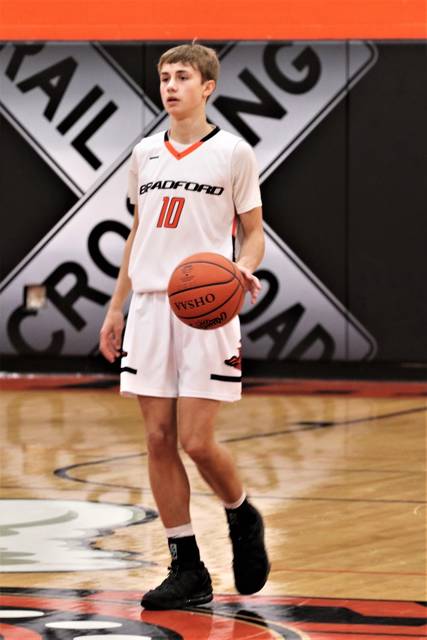 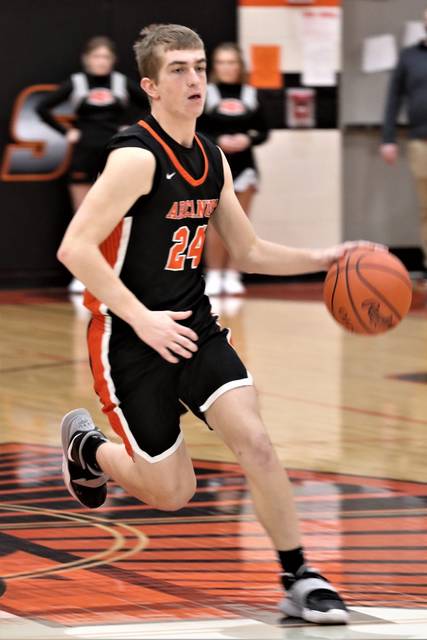 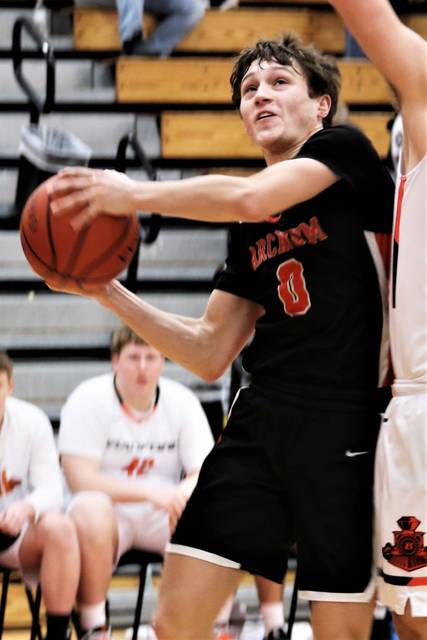 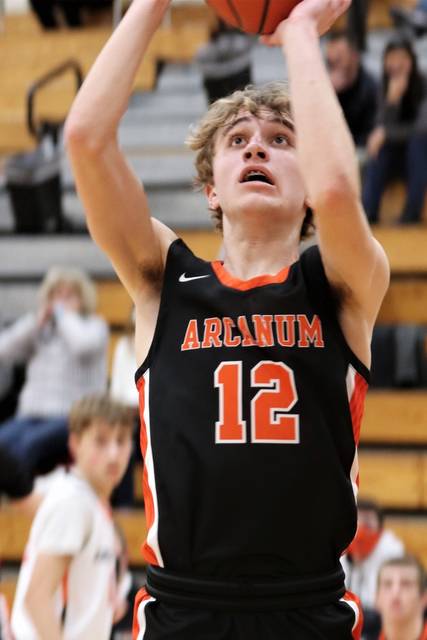 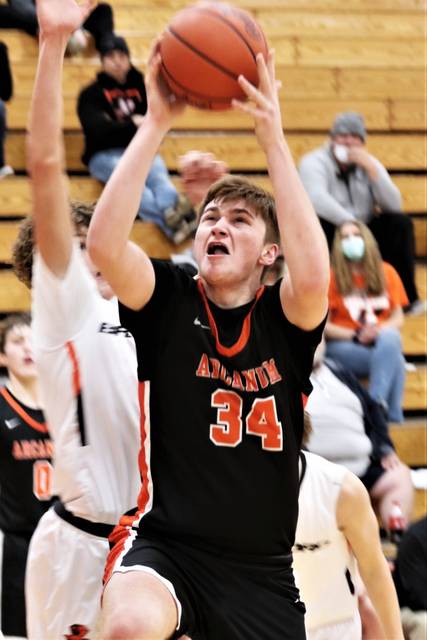 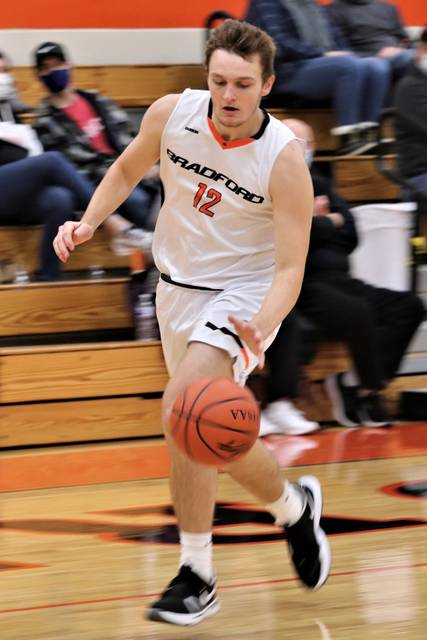 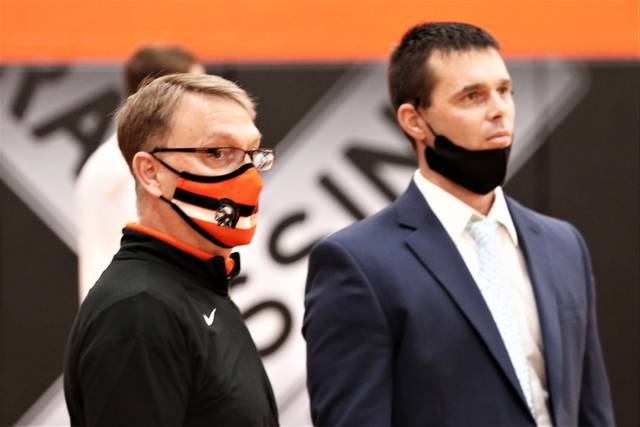