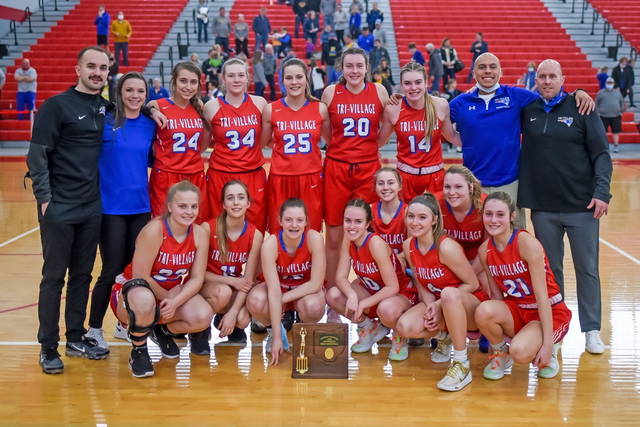 TROY – The Lady Patriots took on Russia in a rematch from the regular season only this time the stakes were higher with a district title on the line. The Patriots won the regular season game 62-45 … but Russia came to play, in the end Tri-Village was able to win the rematch 52-43 to secure their 5th straight District Championship and move on to the Regional Sem-Finals.

Russia came out firing matching everything TV did and when the first quarter ended the game was all tied at 14.

The Patriots leaned on 6’2” junior Meghan Downing in the opening frame as she scored 5 points in the paint and Rylee Sagester added 5 as well.

Russia countered inside with Katy Sherman and Ella Hoehne scoring 4 points each but also got two triples one from Cece Borchers and the other Ashley Scott.

“They started the game extremely well against us and offensively they’ve struggled some this year and was able to score a lot early … but we remained composed,” Tri-Village girls coach Brad Gray said.

The Patriots started off in a 2-3 zone and would switch to a man-to-man and it was enough to change the pace of the game in the 2nd quarter holding Russia to just 5 points in the period.

TV added another 14 points with Downing again playing a big part scoring 6 inside. Hunt added 4 points and Sagester a triple for a 28-19 lead at the break.

“We try to get Meghan Downing involved early and get her active and engaged and when we do that she produces big-time throughout the course of the game,” Gray stated

Despite the good play of Downing and the lead at the break there were concerns for Tri-Village as Morgan Hunt picked up her 3rd foul and the Patriots were getting beat up on the glass.

“We had a very animated discussion at halftime about rebounding the basketball, we knew for Russia to beat us they would need to beat us on the boards. I thought we relied way too much on Meghan to get rebounds and with Morgan getting in foul trouble she wasn’t able to go hard and get them,” Gray stated.

Russia clawed their way to within 6 trailing 33-27 at the 4:55 mark and looking to cut the margin to 4 when junior Delanee Gray dove on the floor while reaching up to get her hand on the ball and was able to tie up the Russia guard for a jump ball that would have been an easy lay-up.

The Patriots then scored 7 straight points after two triples by Sagester and a free throw by Torie Richards to go up 40-27.

Reese Goubeaux knocked down her only points in the game from behind the arch to make the score 40-30 TV heading into the final stanza.

“We go up 13 and every single time it felt like we were pulling away they came down and hit a big 3,” Gray said.

And the Raiders weren’t finished as they connected on two straight fielders at the start of the 4th quarter and had the score again down to 6 points.

Back-to-back fielders by Downing and Hunt got the lead back to 44-34 only to see Russia again come up with a big time shot to keep TV from blowing it open.

“We turned it over a couple of times and they got it down to 6. Then we get it back up to 10 and they (Russia) hit another big 3. Theirkids played really well and kept responding to every run we made,” Gray praised.

TV was needing a score bad and to the surprise of many, including coach Gray, it was his daughter who gave them the juice they needed.

Delanee Gray received a pass in the deep corner and without hesitation lofted it, despite the verbal commands from coach and father Brad Gray.

“Terrible shot, I was yelling no, no, no, when the ball was in her hands … and like she often does, she didn’t listen to dad and took the shot. I’m so glad she knocked it down. She’s a kid who needs confidence and that was a big-time shot and I’m happy for her,” Gray beamed.

Once again the Raiders responded with another triple by Cece Borchers to make the score 47-42.

By this time though the clock was starting to work against Russia with under 2 minutes to play and they would be forced to foul only to see TV put the game away at the free throw line.

“What a great game by Russia and coach Timmerman, he does a great job of scouting us and taking away the things we like to do. His kids played well and that’s a credit to him and his team,” Gray complimented after the game.

“We feel very fortunate, we didn’t play a great basketball game today … but we played well enough to win and now we get to move on and play again,” Gray concluded.

Tri-Village advances to the regional semi-finals where they will play Legacy Christian who defeated Bradford 55-35 in the other district title game. They come in with a 21-3 record and the DIV Southwest District Co-Player of the year Emma Hess. The game will be played at Vandalia ButlerThursday at 8pm. 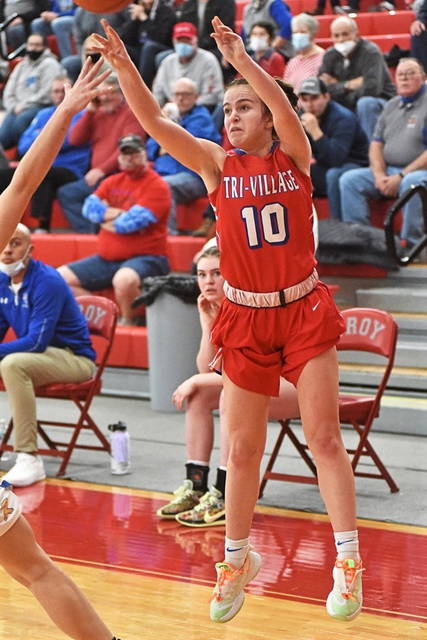 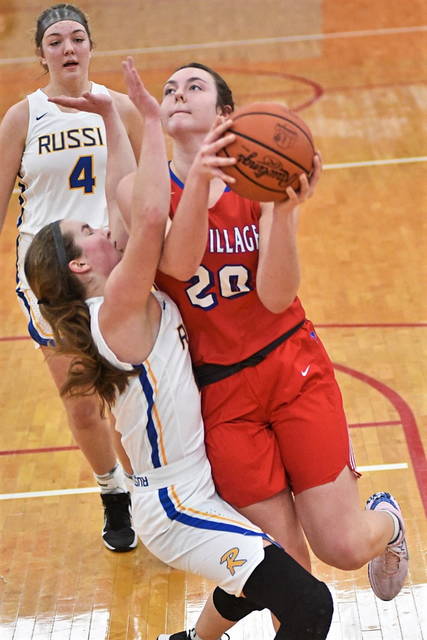 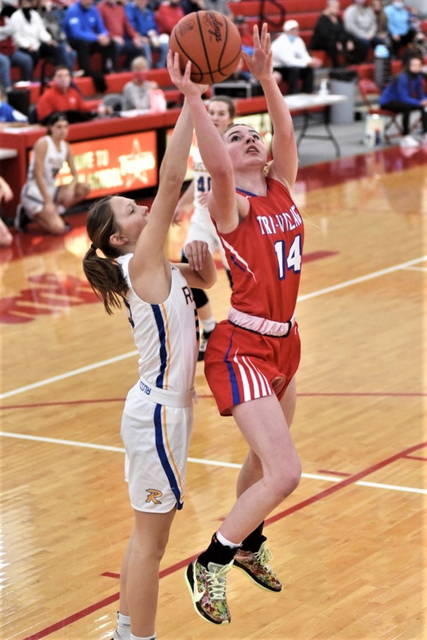 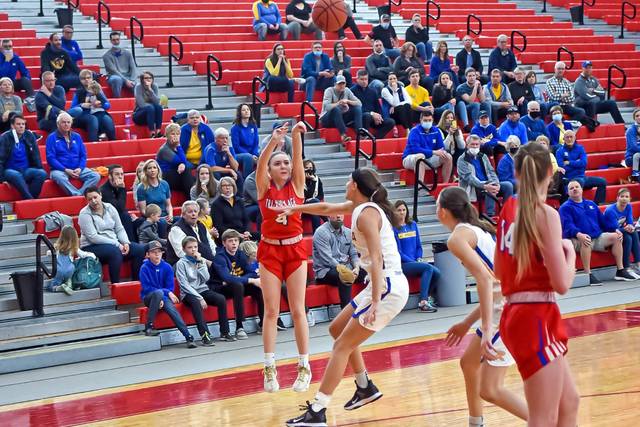