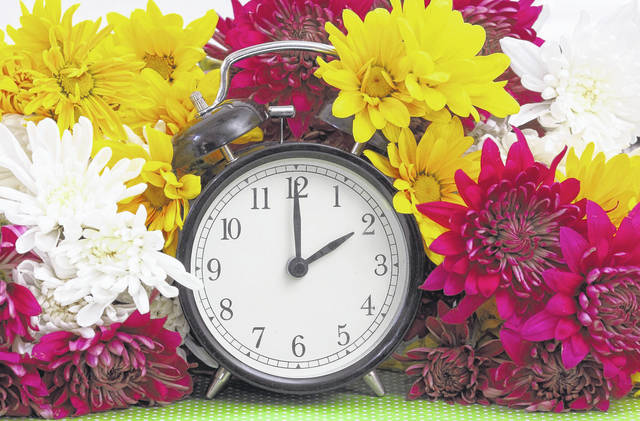 DARKE COUNTY — As the roar of winter mellows, most long for the return of sunny mornings to hear the birds sing and the roosters crow. With the invention of watches and clocks, people have learned to divide time by the hours, with the ability to predict the sun’s rising and setting with precision down to the minute. With such early technology, many began to wonder whether or not an hour (or two) of sunlight could be “gained” by simply turning the hands of time forward or backward. Once considered a revolutionary idea, “springing” the clocks forward each year has become a part of life’s routine in the 21st century, which occurs again this Sunday, March 14.

Although initially adopted in the West by 1915, the idea of saving and spending daily time was on the mind of colonial thinkers, including Benjamin Franklin, who, in 1784, satirically suggested that the Paris gentry change their sleeping habits to save money on oil and candles. However, it was not until 1907 that British builder William Willett devised a system whereby daylight hours could be used more efficiently for energy conservation. It took eight years to establish, and in 1915, Germany officially set their clocks to reflect the time savings; by Spring, 1916, Britain set all clocks to British Summer Time, followed by most European nations, Canada and the United States during World War I, which ended abruptly with the Armistice. During World War II, Britain reestablished a different kind of daylight savings time, wherein clocks were set two hours ahead of Greenwich Mean Time during the summer, known as “Double Summer Time.” Clocks were then rolled back to be one hour ahead of GMT during winter.

In 1966, the U.S. Congress enacted the Uniform Time Act, instituting a system of uniform daylight time throughout most of the U.S. within each time zone. Moreover, in 2007, Congress changed the start of daylight time by moving its start date up on the calendar by three weeks in the spring, and returning to standard time a week later in the fall.

Perhaps, a reason for this change came from a U.S. Department of Energy report which, in 2006, anticipated an electricity savings of four-tenths of one percent for each day of extended daylight time, totalling 0.03 per cent of annual electricity consumption. This notion was encouraged by the non-profit American Council for an Energy-Efficient Economy, which estimated that the prolonged daylight time would reduce carbon emissions by 10.8 million tons.

However, most Americans simply see this time change as an opportunity to “spring forward” to enjoy longer days and splendid weather.