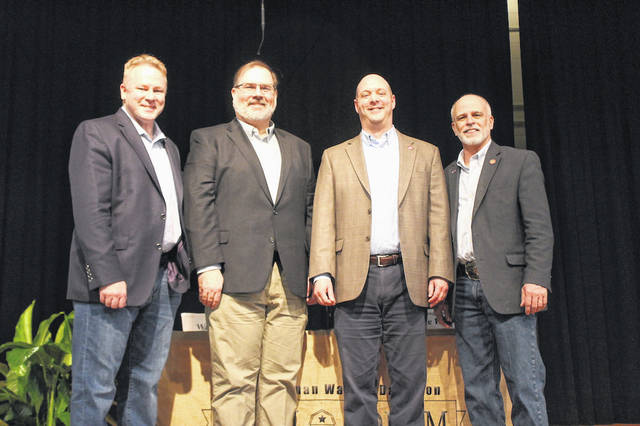 Davidson, a Republican representing Ohio’s 8th Congressional District, weighed in on a number of hot topics surrounding the COVID-19 debate in Washington D.C., and how it relates to local farmers and ranchers. Davidson noted that the most recent coronavirus bill, known as The American Rescue Plan, is more than likely the final round of COVID-19 relief. He informed those in attendance that around $24 billion, of $30 billion planned for ag-related relief, has been distributed.

“I’ve talked to folks with row crops, and it [the relief money] translates to approximately $100 per acre, but that’s not always the case uniformly with all the different programs,” said Davidson, as he delved further into the other assistance programs.

He noted that the Coronavirus Food Assistance Program (CFAP) is one of the larger programs, and there is no clear cut decision on whether the CFAP assistance counts as income. The consensus, Davidson continued, is that CFAP assistance is regarded as a top line form of revenue from a different source — making it count as income. Davidson also spoke on what he believes to be an unconstitutional, racially biased aspect of the new COVID-19 relief bill.

“One of the things that isn’t really COVID-19 related that’s in this last bill that, to me is likely to be unconstitutional, is a racially biased loan forgiveness program,” Davidson said. “If you’re a non-white farmer or rancher, socially disadvantaged is what the references say, you could have your FSA or CCC loans forgiven plus 20 percent. So, 120 percent of your loan could be forgiven I think up to $2.1 million.”

Davidson did, however, acknowledge that the 8th district isn’t the most diverse in the country, and encouraged those who are considered minority farmers or ranchers to take advantage of the program. He expects there will be continued challenges to this development.

Davidson went on to mention the hike in estate taxes as a part of the 2017 Trump tax cuts. He noted that the Biden Administration wants to reverse the estate tax top line down to $3.5 million, and raise the taxable percentage up to 45 percent. Hopefully, Davidson said, members of Congress will fight against this tax. He stated he believes the opposition to the estate tax is bipartisan, and that many recognize the negative impact that estate taxes have on a majority of Americans.

Davidson was heavily involved in trade negotiations throughout the past year, a topic on which he spoke extensively.

“USMCA (United States-Mexico-Canada Agreement) on balance was a big win, we established new tariff rate quotas on dairy products in particular,” said Davidson. “We got Canada to open their markets to imports from the United States, which is big in our area for chicken and eggs.”

Continuing on the topic, Davidson said that imports are no longer tied to domestic production in Canada. He said the tie was previously limiting U.S. trade ability, and also hurting the Canadian agriculture market. He and his colleagues see this switch as a positive development for both American and Canadian agriculture markets. Davidson noted that renegotiations in trade with China have benefited all, and that farmers have paid a big price throughout the process of fixing trade policies. He noted that with China in particular, the U.S. has been struggling to compete with trade, so new policies have again leveled the playing field and opened up new export avenues for farmers across the country.

“Having a manufacturing background, I’m euphoric about the fact we are finally talking about trade, particularly with China, and I believe this is a positive development for our nation’s agriculture market,” Davidson said.

While concluding, Davidson spoke briefly about the Payroll Protection Program (PPP) loans, and noted that many people question why loan forgiveness has been granted to businesses and farms, but not, for example, to students with significant federal loan debt. Davidson explained that Congress recognized early on that state unemployment offices were falling behind, and wouldn’t be able to catch up. He said the goal with PPP forgiveness was to keep businesses funded so they could keep as many people as possible on payroll at their respective workplaces, where employees often have benefits and other additives tied to their employment.

Koehler’s speech touched on a number of past and upcoming state house bills geared toward agriculture, water quality, and food security. He also commended farmers on their willingness to step up in recent years when topics such as water quality and security came to the forefront of the public conscience.

As a part of Ohio Gov. Mike DeWine’s H2Ohio plan, a $172 million initiative geared toward improving Ohio’s water quality, Koehler stated that approximately $40 million went to the Ohio Department of Agriculture. He quipped that farmers stepped up and volunteered over 1 million acres of Ohio farmland for nutrient management plans.

Koehler also spoke on developments for the 2,000 acres of Ohio farmland certified to grow hemp. He said that a number of farmers have begun working hemp, but the state government is still working out the details about how to successfully promote hemp as a commodity, and as a profitable plant to cultivate.

Darke County Commissioner and Master Farmer Matt Aultman focused the bulk of his speech on food security issues that have impacted farmers and the general public during the COVID-19 pandemic. Aultman also touched on rural broadband internet and how COVID-19 has centralized the public’s focus on many aspects of daily life that are often taken for granted.

Aultman offered his insights by stating that average homes typically have only 33 days worth of food, and local grocery stores hold approximately three days worth of food to support the local population. As a county commissioner, Aultman recommended that localities begin taking a closer look at local food production, and how to become more food-secure.

The final speaker, Jack Irvin, serves as the Senior Director of State and National Policy with the Ohio Farm Bureau Federation. Irvin spoke very briefly about his work for Ohio farmers in promoting policy at the state and federal levels of government.

Irvin stated that food supply chain disruptions had a major impact on the agriculture and livestock industry during the pandemic. He said that during the peak weeks of 2020, almost a million fewer hogs and 250,000 fewer cows were processed as compared to previous years. For consumers, however, Irvin noted that the disruption was not widely noticed, and he credited this to the hard work of local farmers maintaining production to the best of their ability.

As it relates to trade, Irvin said he is continuing to work with other agencies and offer his insight to bolster trade that would benefit the agriculture industry.

Irvin offered a positive sentiment in his final statements, saying that the country will endure through the pandemic, and that he has been incredibly proud of the resilience of the American people in working to combat and get through the coronavirus pandemic.

Following this, Irvin welcomed two Versailles FFA students who recited the FFA creed and gave a short speech on combating hunger around the world.

The next section was reserved for questions from the audience, in which the panelists answered questions pertaining to grain marketing, trade, the coronavirus relief bills, inflation, and general inquiry about the state of the local economy and agriculture industry.

Rep. Davidson concluded the event by offering a special thanks to the Versailles FFA students for their help in setting up the event. He also noted that he is always impressed by the productivity of local farmers, and thanked them for their great work and willingness to support the community. Davidson ended by saying that he will continue to work for his constituents and put ideas forward that he believes will improve both Ohio’s 8th District and the United States as a whole. 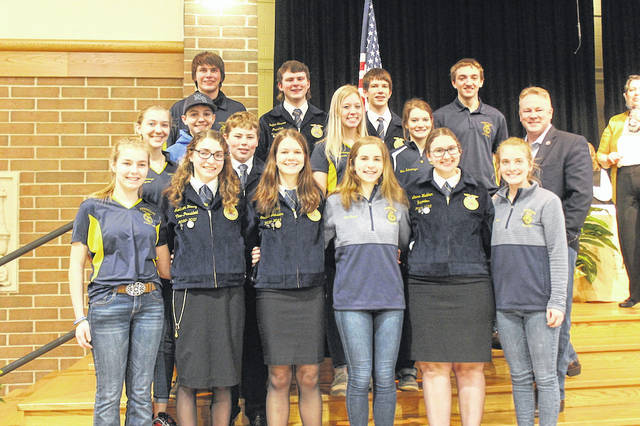