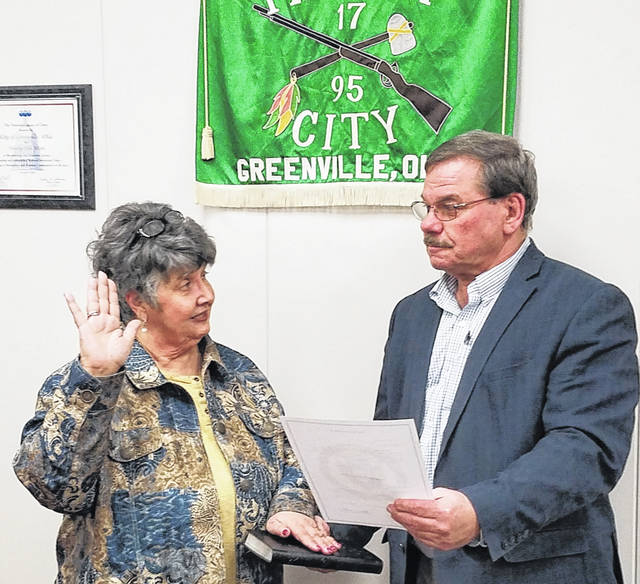 Ely, a Greenville native and Greenville High School graduate, has lived and raised her family in Greenville. She retired in 2012 from EMTEC/Southwest Central Ohio Procurement Technical Assistance Center, a non-profit partially funded by the Department of Defense, the Ohio Department of Development and the Edison materials Technology.

“I have always tried to be informed as to what is happening in my home town. I worked in Dayton for years and that did not enable me to take an active part in local politics. Since my retirement, I have become more engaged in what’s going on,” said Ely.

Since her retirement, Ely has become an active member of the community as member of the Darke County Republican Party Central Committee and as a member of the Darke County Republican Women’s Club, currently serving as its second vice-president. She also serves as an election poll worker. In addition, Ely is involved with many Radiant Lighthouse church ministries, where she founded a Bible study for the developmentally disabled, and has seen the group grow from two to 18 members who attend weekly. Ely also makes herself available to seniors when they have transportation needs for doctors’ appointments, grocery shopping and other errands.

In her new role as city councilwoman, Ely commented on what issues and concerns she would prioritize in representing her constituents.

“There are many items that need to be addressed in our city. I am currently trying to bring myself up to date with regards to the most pressing items that have been and will be brought to council,” she said. “I have spent time reviewing previous minutes and committee reports so that I might be informed and be able to make proper decisions with regards to city business. I have two social issues that are of great interest and concern to me, the senior citizens and the developmentally disabled citizens of our community. I would like to see more opportunities and services offered to these two underserved groups of citizens.”

Ely represents those living in Greenville’s Second Ward, which spans three precincts: W. Fourth Street (south) to Sater Street and Sweitzer St. (west) to Haddison Ave; Sater St. (south) to Southbrook Dr. and Fair Street (west) to Jackson St.; and Chestnut St. (south) to Fair St. and Oak St. (west) to Harrison Ave. Her top priority is reaching out to her constituents and all Greenville residents, to listen to their concerns and suggestions for the future, and bring them forward to the city council.

“As I become more familiar with the workings of the city and the needs of the Ward I serve, I will then be able to address issues in detail,” Ely said. “I am currently putting together a fact sheet about myself to distribute to those in the ward asking what concerns they have and what they’d like to see happen in our city.”

She is committed to encouraging Greenville residents to participate in city government, by attending meetings and voicing their concerns.

“All residents, both young and old, should be interested in how their city government operates. One of the best ways is to attend a council meeting. The public, due to COVID restrictions, can attend meetings at present time via Zoom or by YouTubeLive. As restrictions are lifted, the public can attend a meeting on the first and third Tuesdays of each month,” said Ely, adding, “It is also important to know the individuals who make up your city government.”