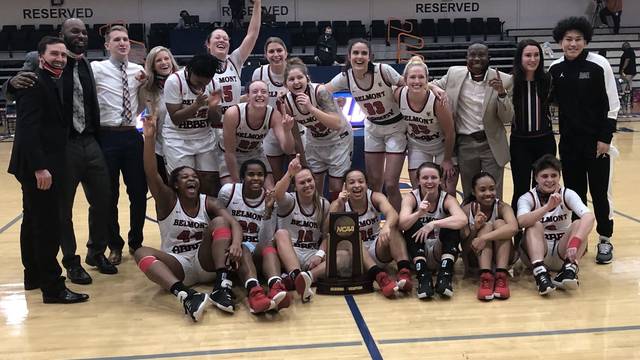 COLUMBUS – The Tri-Village boys and girls basketball teams may have finished playing this year after outstanding seasons and long tournament runs … but there is still a Tri-Village connection playing in what we’ve all come to know and love as“March Madness”.

Allie Downing who is the daughter of Scott and Rachelle was a 2017 Lady Patriot alumni and is playing for Belmont Abbey located in Belmont, North Carolina.

Her team is having an outstanding year and has advanced to the NCAA DII Women’s Basketball “Elite 8” by winning the Southeast Regional and will play in Columbus, Ohio on Tuesday March 23rd at 8:45pm.

Allie had a great career at Tri-Village scoring over a 1,000 points and during her senior year helped the Patriots to a 24-2 record while winning a CCC, Sectional and District championship while advancing to the Sweet 16.

Downing is now a senior on the Crusaders squad and has had an outstanding collegiate careeras well, scoring over a 1,000 points. She, along with a couple other high profile seniors, have led the team to their first ever “Elite 8” appearance. Belmont Abbey is the 4th seed and will play 5th seed Central Missouri.

The Abbey is currently on a 20 game win streak and stand 24-2, 15-1 in the conference – winning a league title for only the second time in school history.

It also is only the second time the team has qualified for the NCAA tournament as well – qualifying last year,only to see it cancelled due to Covid.

“We were on the floor getting ready to play and got the news the tournament was cancelled, it was devastating, especially for our two seniors on the team because they were instrumental in our growth and development as a program,” Allie Downing stated.

After starting the season with two early losses the team never doubted themselves using the two seniors who never got a chance to play in the NCAA as motivation to get back.

They achieved that goal by beating Barton in the conference championship game on a buzzer beater shot by Allie Downing that sent the game to overtime where the Crusaders would win it for the second year in a row.

“Making that shot was a great feeling especially after the coach drew up the play for me to take the shot,” Downing said. “It was a surreal moment that really didn’t sink in till later,” she added.

Just like the rest of her teammates Allie feels very fortunate not only to have a season … but thankful they made it back into the NCAA and advancing in the tournamentall the while knowing Covid could have shut them down again.

She expressed her disappointment that only a few people would be able to see her play in person because of Covid but wanted to thank the many supporters she’s had over the years.

“My family has been super supportive over the years making it to as many games as they could despite having two sisters still playing back home. Even with Covid they’ve been here when they allowed fans to come … and that means a lot since they are 8 hours away.

“I want to thank the community who followed me and sent me text messages or contacted me on social media after games. They’ll tell me they watched us online in games I didn’t even know about and it just means so much to me,” Downing added.

Downing pointed out much of her success is a direct result of hard work, structure and discipline that she got at Tri-Village that prepared her to be a leader and helped her to contribute immediately as freshman.

That is something Tri-Village coach Brad Gray echoed about his former player.

“It is so exciting to see one of our own being able to compete at such a high level on the national stage. Allie has always put a tremendous amount of effort and desire into the game of basketball and because of that is experiencing something so few get the chance to do,” coach Gray said.

“She’s had an exceptional career and to cap it off by having the year that she is, is just awesome. Coach Williams and Belmont Abbey has been a great fit for her. I’m so happy for Allie and the Belmont Abbey team,” Gray added.

Due to Covid-19 the NCAA has limited the number of fans who can attend the game.

“We wish we could all be there to root her on in person, especially with it being so close to home, but I’m sure Patriot fans will all be following the upcoming games very closely,” Gray concluded.

For those who want to watch Allie and the Belmont Abbey basketball team play it will be shown live at www.ncaa.com. 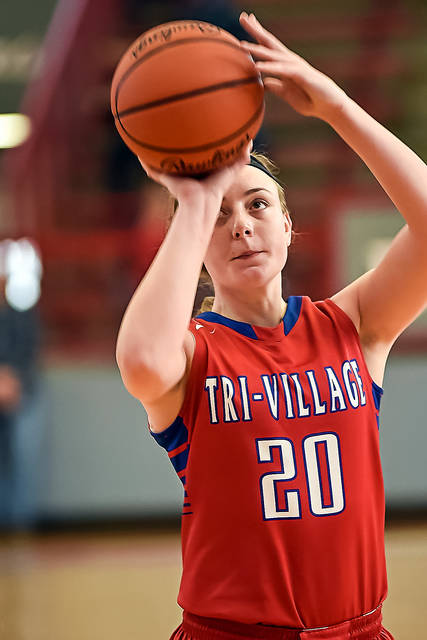